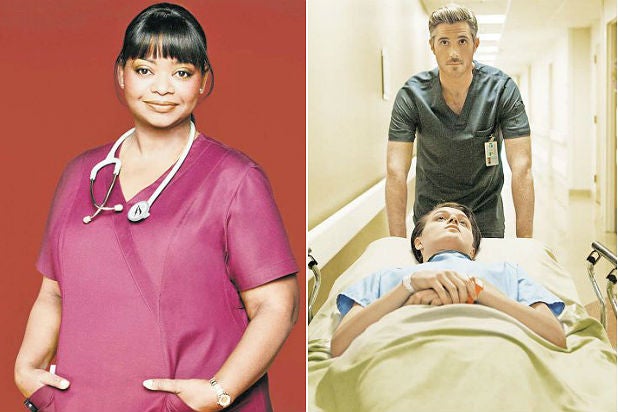 Even if you hate teen shows, Fox’s new children’s hospital series might still be the show for you.

Yes, “Red Band Society” rounded up some serious young talent for the fall dramedy, but the leads on the show are undoubtedly the accomplished adults.

Spencer, who scored a supporting actress Oscar for 2011’s “The Help,” stars opposite Dave Annable, otherwise known as the “Hot Doc” of the faux Atlanta, Ga. hospital.

Despite the show shooting on the east coast, both stars are thrilled to be a part of the highly anticipated Steven Spielberg production. And as always, a potentially great show started with a great script, they said.

Spencer told TheWrap that the “Red Band Society” pilot script was the best she had read in a long time. Annable agreed, adding that he had previously been “depressed during pilot season,” stuck reading “horrible scripts,” but that this one was “a page turner” that moved him.

While both Spencer and Annable wholeheartedly believe in the material written by Margaret Nagle and her team, neither loves the high ratings expectations that come with making a much-buzzed-about network pilot. Aside from Batman prequel “Gotham,” “Red Band Society” is a clear No. 2 on Fox’s fictitious high hopes ranking of new shows and it might even be the top dog when the demo dust settles, something the actors predictably didn’t want to touch.

“I try to not think about that,” Spencer said. “I do know that [Fox is] very enthusiastic. I don’t allow myself to think about marketing, or numbers — I just don’t.”

Annable has seen both sides of the ever-valuable Nielsen coin, experiencing big success as Justin Walker on ABC’s Sally Field-Calista Flockhart led ensemble “Brothers & Sisters,” and an even bigger letdown from “666 Park Avenue,” which was axed by ABC after 13 episodes in 2012.

“I learned that we can only control so much,” Annable said. “Every scene you’re in, you give 100 percent. We can’t control the rest. In that sense, we’re sort of bottom of the barrel.”

Another thing that the duo agrees on is the importance of their fake TV occupations in the real world.

“At times it’s the most difficult job in the world, and at times the most rewarding job in the world,” Annable said of the doctors and surgeons who he observed while preparing for the role — including head writer Nagle’s cousin, who let him sit in on a Carotid Endarterectomy (neck surgery) at St. Joseph’s Hospital. “They’re real heroes.”

Annable hopes that the show will help real-life cancer sufferers as well, saying if the show saves one less kid going through chemo from getting mocked for their shaved head, the cast and crew have done their job.

Spencer added, “I loved that we were dealing with real world issues and making it not taboo to be sick.”

In between takes, Annable, 34, and Spencer, 44, both take advantage of the young cast surrounding them by swapping veteran acting advice for tips on the newest smartphone apps.

“These gray hairs I have are all real,” he quipped.