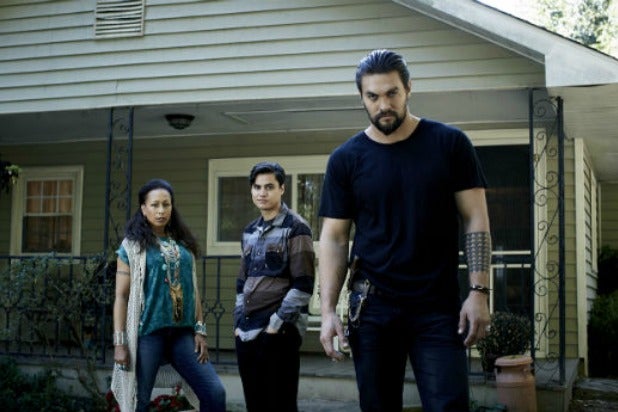 The exceptionally well-cast “The Red Road” starts well, but slips in the second episode. If I were you, I’d watch the premiere and wait a few weeks for some consensus on whether it recovers.

The six-part series is set in a northern New Jersey community adjacent to Native American land. But their lineage is in dispute: The tribe isn’t federally recognized, and one character, Philip (Jason Momoa) says his people are actually descended from “slaves and whores.”

Sounds a little “Game of Thrones,” Momoa’s former show. In the first episode, he’s a hulking, charismatic presence, just as imposing when he’s not speaking Dothraki. Good as he is in the first episode, there’s nothing he can do about the second, where his character rarely branches out from being one-dimensionally ruthless.

Julianne Nicholson plays Jean, a woman Philip ran around with in their wild high school days. In the first episode, she gives a crushing performance as a woman struggling with alcoholism. But in the second episode, something happens to her character that no actor could sell. (Nicholson will be okay: She’s on a run with “Masters of Sex” and “Boardwalk Empire,” and I’d be surprised if she doesn’t get an Emmy or Oscar soon.)

The actor who fares the best on “The Red Road” is Martin Henderson, as Jean’s cop husband, Harold. If the rest of the characters had been allowed to stay as grounded as he does, the show would have been better for it.

Jean and Harold have a daughter, Rachel, who’s in love with a boy from the sort-of-tribe. He’s part of Philip’s complicated extended family. Jean sees herself in Rachel, as the show’s most heavy-handed scene points out: She looks at her reflection in the mirrored letters R-A-C-H-E-L in her daughter’s room.

We soon learn that the connections between the town and the tribe run deep, and that they share a history of mutual resentments. Why don’t people on Sundance’s small-town dramas, from “Rectify” to “The Returned,” ever just move?

Those dramas build gorgeously to their dramatic moments, and get deeply under our skin. The “Red Road” has a strike against it from the start: its fictional setting and fictional tribe make it hard for us to feel invested in the first place, and when the characters start acting crazy too soon, there’s not much here to hold us.

I’m not giving up yet – I really liked the first episode – but the “Red Road” wanders off the path.

“The Red Road” premieres Thursday on Sundance at 9/8c.