It’s an understatement to say the audience for Simon Rumley’s “Red White & Blue” North American premiere Sunday was stunned. As the grim climax neared, only a handful snuck out as sadistic close-ups filled the theater with dread — somehow a satisfying end to what’s essentially a love story. Or maybe a Western revenge fantasy.

“The main thing about the film is it’s trying to get inside these characters — who in some respects aren’t pleasant, but they’re not evil characters doing bad things,” Rumley said in the Driskell Hotel lounge on Monday morning. “It was trying to really get across the better aspect of the darker part of humanity.” 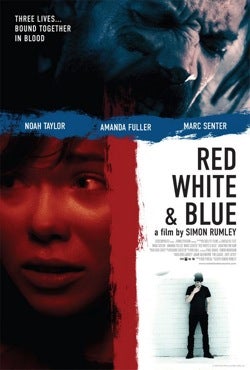 It also acts as Rumley’s ode to Austin and his perception that we are “essentially good and, on another level, f– ourselves up all the time for no real reason.”

Rumley isn’t kidding. “Red White & Blue” opens with Erica (Amanda Fuller) strutting into a dive bar, focusing firmly her dusty white cowboy boots and scanning the room. She settles on punker Franki (Marc Senter) and his two friends as the camera smashes through shot after shot, culminating in a pensive four-way tryst.

This entire sequence, sans dialog, continues as Erica has three more of the same one-night stands with whomever she can before walking back to the group home she cleans in trade for board.

There, she encounters a new occupant, Nate (Noah Taylor), a stringy, bearded boarder who speaks quietly, but relates one of the creepier monologues involving lighting parakeet on fire for fun.

“It’s a Western and a love story,” Rumley said. “When Nate turns up and starts talking to Erica, you’re never really sure if he is some kind of complete weirdo or whether he’s harmful or harmless. All these stories he’s telling about the parakeet on fire, you kind of think they are true because they’re so outlandish.”

Nate begins to watch over Erica, helping her gain work and slowly developing a relationship that eschews her traditional one-night stand for something beyond sex. By then, we’re brought full circle back to Franki’s story, which crashes back into Nate and Erica to arrive at a violent end.

But do the three characters revolve around each other in a circular fashion of redemption and downfall? Rumley’s fine with that reading. He’s also fine if Erica and Nate are viewed as his principal characters with Franki as a third-act catalyst.

It’s in the third act that “Red" eschews any previous thought of romance and becomes a revenge saga eclipsing Park Chan-wook’s “Sympathy for Mr. Vengeance.” Indeed, in the act, Nate becomes the prototypical Quiet Man in Westerns who reveals his past nature when provoked. And it may be one of the best leaps from nerdy sidekick to frightening leading man ever put to film.

“It’s not an easy role to do as well, having that quietness and stillness as well. He’s a pretty scary character. It’s not his size, but I think it’s a great tribute to Noah’s acting skills.”

In the end, though, the real star of “Red White & Blue” may be the various ways Nate uses duct tape to terrorize and torture.

“I like the idea he has these seemingly innocuous things that aren’t threatening. His imagination is such that he can make them dangerous. I came up with that from watching films and seeing someone suffocated with a bag and never quite believed it. I suppose it’s always been a pet question: Couldn’t they get out of that situation?

“The whole thing with the duct tape is taking that one step beyond.”