Mayer’s and Staggs’s new company, which does not yet have a name, has the financial backing of Blackstone — but is not the special-purpose acquisition company (SPAC) that Mayer and Staggs recently announced.

Witherspoon and Hello Sunshine CEO Sarah Harden will join the board of the new entertainment company and continue to operate Hello Sunshine. They and other top executives will maintain an ownership stake in Hello Sunshine.

Despite the sky-high pricetag, one of the individuals close to the deal told TheWrap they are “feeling quite good” about the $900 million valuation.

One of the Reese’s Book Club selections, “Where the Crawdads Sing,” is being adapted by Hello Sunshine into a feature film by 3000 Pictures and Sony Pictures. Hello Sunshine also has Mindy Kaling and Dan Goor writing “Legally Blonde 3” for MGM.

The Wall Street Journal first reported the news of the Hello Sunshine sale. Last month, the Journal reported Hello Sunshine could sell for as much as $1 billion. Apple was among the companies said to be interested.

Hello Sunshine was founded in 2016 as part of a joint venture with AT&T, which holds a minority stake through its ownership of Otter Media. Along with Witherspoon, Hello Sunshine’s owners include Seth Rodsky and Jim Toth, a former CAA agent who is Witherspoon’s husband.

The Hello Sunshine sale is subject to regulatory approval and customary closing conditions.

The deal could open the floodgates for other big sales of star-driven production companies. Last month, Bloomberg reported that Nike and others were looking at LeBron James’ SpringHill production company at around a $750 million price tag.

Also last month, Legendary Entertainment, the company behind “Godzilla vs. Kong” and the upcoming “Dune,” was exploring a possible sale or potential merger with a partner, according to two individuals with knowledge of the situation. The Wanda Group previously acquired Legendary from founder Thomas Tull in 2016 for $3.5 billion.

A24 has reportedly been in discussions with potential buyers seeking to own the rights to art-house hits like “Uncut Gems” and “Minari” for $2.5 billion to $3 billion. Imagine Entertainment, founded by Brian Grazer and Ron Howard, is also in discussions with buyers, an individual with knowledge recently told TheWrap. 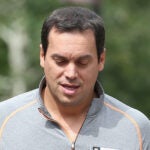 “Today marks a tremendous moment for Hello Sunshine. I started this company to change the way all women are seen in media. Over the past few years, we have watched our mission thrive through books, TV, film and social platforms,” Witherspoon said in a statement. “Today, we’re taking a huge step forward by partnering with Blackstone, which will enable us to tell even more entertaining, impactful and illuminating stories about women’s lives globally. I couldn’t be more excited about what this means for our future. I am committed to continuing to create opportunity for filmmakers, authors and creators of all backgrounds and experiences to tell their stories in their own way, and to reach more audiences who will see that their stories matter. This is a unique time in our world where the intersection of art, commerce and media makes it possible for these creators to tell their stories and Hello Sunshine is here to put a spotlight on their amazing creations.”

Mayer and Staggs praised the Hello Sunshine team in their own statement. “Hello Sunshine is a perfect fit for our vision of a new, next generation entertainment, technology, and commerce company,” they said. “We seek to empower creators with innovation, capital, and scale to inspire, entertain, and delight global audiences with engaging content, experiences, and products. Our platform will foster a uniquely creator-friendly culture that gives elite talent the resources they need to create and capitalize on their best, most inventive work.”