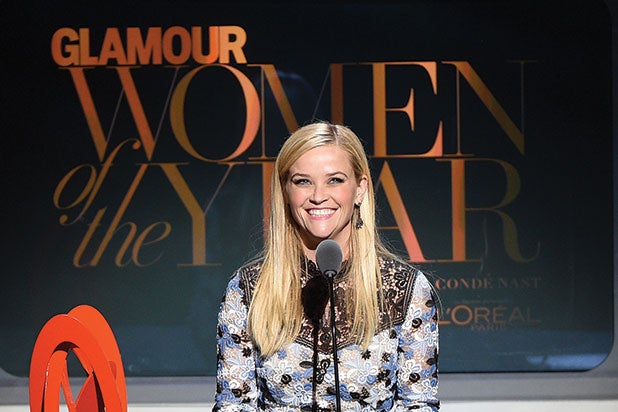 Reese Witherspoon just got in line when it comes to calling out sexism in Hollywood.

While accepting her award at Glamour’s annual Women of the Year event in New York on Monday, where she was honored for her production company Pacific Standard, Witherspoon pointed up the need for more female-focused films, a goal of the company she co-founded with Bruna Papandrea.

“Films with women at the center are not a public service project,” she said. “They are a big-time, bottom line-enhancing, money-making commodity.”

“Ladies and gentlemen, I think we are in a cultural crisis in every field, in every industry,” she continued. “Women are underrepresented and underpaid in leadership positions. No wonder we don’t have the healthcare we deserve or paid family leave or public access to early childhood education. And that really worries me. How can we expect legislation with our rights and needs being preserved if we don’t have equal representation?”

During her speech, she complimented the other nominees and asked for them to give her the rights to their biopic first after her success with films like “Wild” and “Gone Girl.” However, she took that moment to subtly call out ageism in Hollywood, a topic that has been hot among Hollywood actresses like Meryl Streep, Helen Mirren and Maggie Gyllenhaal, who famously told TheWrap that, at 37, she is considered too old to play a 55-year-old’s love interest on screen.

Also Read: Emma Thompson Says Hollywood Sexism 'Is Worse Than It Was Even When I Was Young'