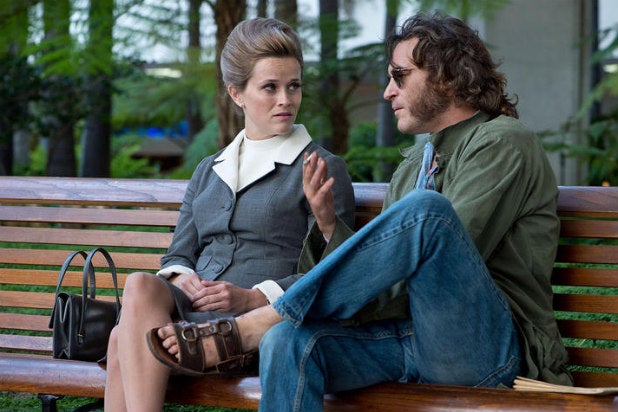 Little is known about and even less has been seen from Paul Thomas Anderson‘s upcoming movie, “Inherent Vice.”

The first glimpse of the film that reunites Reese Witherspoon and “Walk the Line” co-star Joaquin Phoenix gives a preview of the normally modern actress donning an authentic 70s style, in a preview photo released by the Los Angeles Times on Wednesday.

Witherspoon plays Deputy D.A. Penny Kimball, whose hair is a dead giveaway for when this movie takes place. Sitting on a park bench next to co-star Phoenix, the petite star’s bouffant hair sits high on her head as a look of concern floods her face. Set in 1970 Los Angeles, Phoenix portrays drug-fueled detective Larry “Doc” Sportello, who is investigating the disappearance of a former girlfriend.

No official trailer for “Inherent Vice” has been released and only a small piece of footage from the film was seen in a New York Film Festival trailer from earlier this month.

If this photo is any indication though, it’s probably fair to say “Inherent Vice” is going to give 2013’s “American Hustle” a run for its money in the retro race.

Also read: Reese Witherspoon in ‘Wild': No Makeup? No Problem

“Inherent Vice” is due to premiere at NYFF on Oct. 4 and will receive a limited release in December.