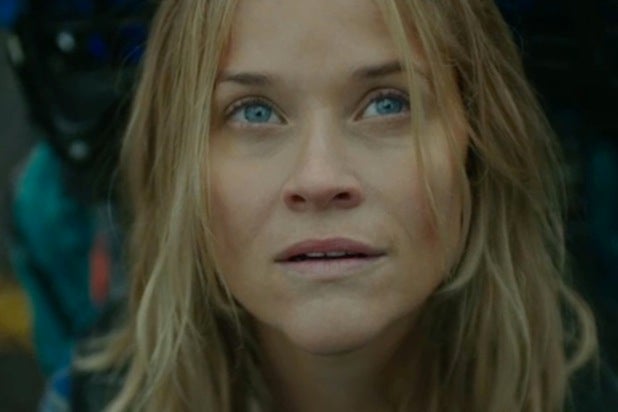 Reese Witherspoon looks raw, ragged, bruised and battered onscreen in Jean-Marc Vallee‘s “Wild,” which premiered in Telluride and came to the Toronto International Film Festival on Monday. As Cheryl Strayed, the author of the book about her hike along the Pacific Coast Trail as a form of brutal therapy,  Witherspoon is resolutely unglamorous, whether she’s getting increasingly haggard along the trail or shooting heroin or engaging in indiscriminate sex in the film’s numerous flashbacks.

But at the time she was making the movie, Witherspoon didn’t even know exactly what she looked like. Vallee, who made the film on the heels of last year’s Oscar-winning “Dallas Buyers Club,” came to the set with an order: Cover all the mirrors in Witherspoon’s dressing room and in the makeup trailer.

“He said, ‘I want to make sure you have no hair and no makeup,'” said Witherspoon at a Monday press conference prior to the premiere. “I said, ‘Sure.’ But I figured we’d have a little bit. A little mascara and coverup — the ‘no makeup’ look.”

Wrong. “He said, ‘No. No makeup.’ And I said ‘OK, let’s try it.’ And when they showed me the dailies, it was raw. I’d never seen myself in movies like that before. But if Cheryl was brave enough to give away every part of her vanity [in the book], I have to be brave enough to show myself like that onscreen.”

The lack of vanity will no doubt pay dividends come awards season, even though Witherspoon insisted that her only goal was to please Strayed, whose bestselling book she optioned immediately after reading it in 24 hours.

With “Wild,” Witherspoon joins Eddie Redmayne from “The Theory of Everything” as the surest Oscar nominee of the festival. The movie is hers from start to finish; other characters come in and out as Strayed encounters them on the road or in flashbacks, but every scene is from her point of view. It is a fearless and fierce performance — and as Witherspoon suggested in the press conference, one that is raw and revealing in multiple ways.

The question left unanswered is whether “Wild” will strike voters largely as a performance piece, winning plaudits for Witherspoon and Laura Dern in the same way that “Dallas Buyers Club” did for Matthew McConaughey and Jared Leto, or whether it can go beyond that to figure in the Best Picture conversation.

At the moment, it seems a solid contender across the board, and a near lock for Witherspoon — who not only went sans makeup, but found that Vallee refused to let the prop department stuff her huge backpack with newspapers to make it lighter.

“When I first showed up, Jean-Marc said, ‘Why does the backpack not look heavy on your back?'” said Witherspoon. “I said, I’ll make it look heavy [when we shoot] I’m going to pretend, of course.’ And he said, ‘No, it has to be heavy.’ And it really changed the way I walked and the way I stood.”

At the press conference, screenwriter Nick Hornby (who wrote the novels “High Fidelity” and “Fever Pitch” and the screenplay for “An Education”) said Strayed’s book was “a really loud, angry beautiful song,” and compared it to the fierce concert tour undertaken by Bruce Springsteen on the heels of the 1978 album, “Darkness on the Edge of Town.” (A later Springsteen song, “Tougher Than the Rest,” shows up in the movie.)

Both Hornby and Vallee, meanwhile, said they had no interest in hiking: “We went on one hike in Telluride,” said the director, “and I still have two blisters on my feet.”

And when asked about the perception that because “Wild” focuses on a woman, it is a “chick flick,” everyone onstage bristled.

“This isn’t a book for women,” said Strayed. “I’m a feminist … and I think a woman’s story is a human story. I’m interested in answering the question, What does it mean to be human? From the beginning I insisted that the book not be marginalized in that way, and it never was … This is not a film for women, this is a film for people.”