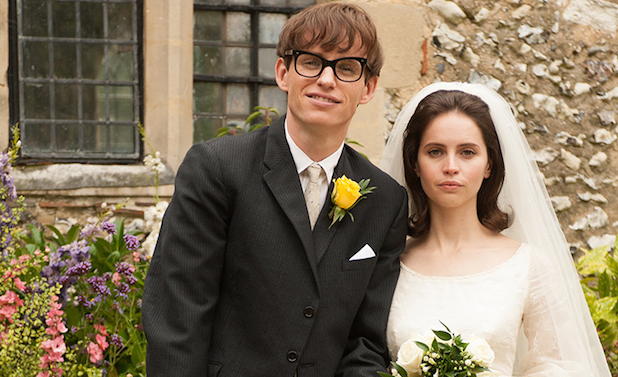 The Stephen Hawking drama “The Theory of Everything” debuted to a triumphant reception at the Toronto International Film Festival on Sunday night, bringing a moment of déjà to at least a few people at the Princess of Wales Theater.

It was almost exactly four years ago, after all, when another film about a famous Englishman with trouble communicating debuted to another rapturous opening. That movie, “The King’s Speech,” went on to win Oscars for Best Picture, Best Director and Best Actor, which might be a tall order for “The Theory of Everything,” directed by James Marsh (“Man on a Wire”).  Still, it was impossible not to think of the earlier film when the audience roared as the credits rolled and leapt to its feet when stars Eddie Redmayne and Felicity Jones took the stage at the end of the premiere.

“The Theory of Everything” played like gangbusters. Sure it’s sentimental at times in its approach to the the long relationship between the brilliant physicist and his wife Jane, who met him at Cambridge shortly before he received his diagnosis of the degenerative Lou Gehrig’s disease, also known as ALS (amyotrophic lateral sclerosis). His doctors suggested that he had about two years to live.

Of course Hawking beat those odds by decades (he’s now 72). There’s no real suspense in his fight for survival or his struggle to continue to communicate his ground-breaking scientific theories as his body made that harder and harder.

So instead the movie tells us how it happened, anchored by rich and resounding performances by Redmayne and Jones. The former seems to be a guaranteed Best Actor nominee, but Jones shouldn’t be overlooked either. She may not get the degree-of-difficulty points that Redmayne earns for his evocation of Hawking’s physical condition, but the film is as much Jane’s story as Stephen’s (indeed it is based on her memoir), and she gives it heart and humanity.

Hawking is not a cardboard hero, some suffering genius with an electric voice. As portrayed in Anthony McCarten’s screenplay, Hawking remains a sharp and funny three-dimensional person, with a staunch opposition to religion and a lusty eye for women. Redmayne manages to convey Hawking’s mordant sense of humor through the flicker of an eye and the lingering (oft withering) gaze.

There’s no grand, rousing ending here the way there was in “The King’s Speech.” But after a too-mawkish moment — we expect a little more from the professor than “where there is life, there is hope” — Marsh finds a quiet, lovely grace note on which to conclude.

The director, best known for his Oscar winning documentary “Man On a Wire,” also finds humor in the story, aided by significantly cooperation from the Hawkings (Jane and Stephen remain friends though they divorced and she has remarried). Redmayne and Jones told TheWrap that the Hawkings even showed up on the set to watch an early scene. “It was terrifying,” said Redmayne in an interview on Sunday, “to look off the set and see him sitting there watching.”

Hawking approved enough of what he saw to allow Marsh to use his real computerized voice in the film, and met with the actors – though, said Jones, he wasn’t as interested in the guy playing him than he was in the girl playing his wife.

“Stephen is a real ladies’ man,” she said with a laugh. “He didn’t pay much attention to Eddie.”