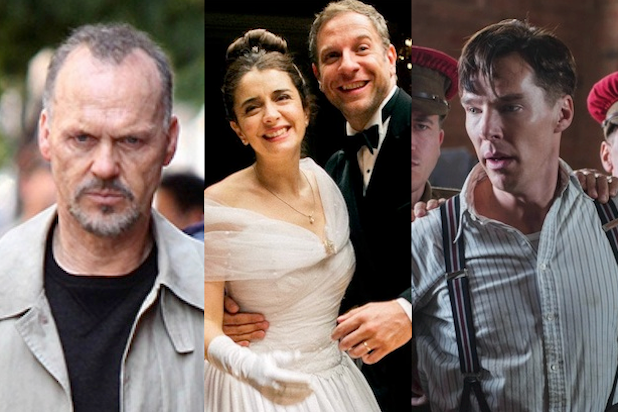 Now that most Telluride Film Festival passholders have made the 9,000-foot descent back to sea level, what lessons do the newly re-oxygenated attendees have to impart? A few that come to mind in the wake of the 41st annual Colorado confab:

1. Telluride isn’t always going to be a Best Picture bellwether.
Last year, festival-goers came back after Labor Day crowing that it was going to be a two-picture race, between “12 Years a Slave” (which world-premiered in Telluride) and “Gravity” (which had its American bow there). And, despite all the cries that it was way too soon to make that call, that’s just what it turned out to be.

Past editions had brought debuts of “The King’s Speech” and “Slumdog Millionaire,” making the festival a must-stop for Oscar prognosticators. But no one left this year’s festival feeling sure they’d seen next February’s big winner.

What attendees did get were three films with very strong chances of getting Best Picture nominations … all with perceived handicaps strong enough that no one would consider any of them a shoo-in to win. “Birdman”: great … and weird. “Foxcatcher”: great … and grim. “The Imitation Game”: great … and slick, maybe even by the Academy’s standards.

But even if these three pictures only end up having what it takes to get in the race and not necessarily finish it, those who come to the fest for that kind of buzz will feel as if they got a healthy head start.

2. If you want to win the buzz contest at a bummer-iffic film festival, bring a great comedy.
The movie that had the greatest word-of-mouth in Telluride? Not the crowd-pleasing “Birdman” or “Imitation Game,” though those were awfully close. If the festival had an audience award, it almost certainly would have gone to “Wild Tales,” an Argentine film that first played in Cannes, and which Sony Classics is set to release some time in the near future. (Presumably not soon enough for all the non-festival-going cineastes who are dying to see it now.)

At one of the screenings, director Damián Szifrón reportedly went to the projection booth to ask them to turn up the sound because audience laughter was drowning out the dialogue.

If that wasn’t indication enough that “Wild Tales” was working spectacularly well, Telluride took the unprecedented move of first announcing “Birdman” as the final “TBA” of the festival Monday night, then rescinding that late Monday afternoon and booking “Wild Tales” at the Palm Theatre in its place. The move upset a few people, but delighted a whole lot more who’d waited in vain in the increasingly long lines for “Tales.”

For most critics, it might have only been the second-, third-, or fourth-best film of the festival. But for audiences who’d just sat through their umpteenth deathbed scene, it was the unexpected delight of peals of laughter that sent them home raving.

Oh, one other lesson offered by the success of “Wild Tales”: A multi-episode omnibus film can work … wildly. Go figure.

3. If the Best Picture race isn’t coming into focus, the male acting categories might be.
Benedict Cumberbatch in “The Imitation Game,” Michael Keaton in “Birdman” and Steve Carell and Channing Tatum in “Foxcatcher” all moved way up in the ranks of likely contenders after being seen and worshipped in Telluride. Gael Garcia Bernal is at least a distinct possibility for toplining director Jon Stewart’s well-liked “Rosewater.”

In a perfect world, Timothy Spall, who brilliantly makes the leap from British character actor to lead in Mike Leigh‘s “Mr. Turner,” would have a shot, too — and he did pick up a best actor award at Cannes. But it’s easy to imagine Academy members giving in to the temptation to turn off their screeners of the slow-starting, two-and-a-half-hour period drama before they get to the meat of his performance.

Swank probably has an even tougher road to hoe, appearing in a film that drew mixed reactions for its frequent tonal shifts and an inevitably polarizing plot twist that sheds a wholly different light on her character. She could probably also use a more effusive champion than director/co-star Tommy Lee Jones, who did a Q&A in which he called Swank’s performance “pretty good” and said “she got better after the first day.”

(In fairness, Jones is such a difficult interview that you could almost see Leonard Maltin dripping flop-sweat during their Q&A’s awkward silences.)

5. Even with advance hype on seemingly almost every festival movie, real sleepers can still break through.
A film that entered the festival with no buzz, and exited as one of the word-of-mouth favorites, was “’71,” an Irish drama set at the height of the IRA-related battles in Belfast. It starts out as a sort of variation on “Black Hawk Down,” as a wounded soldier gets separated from his unit in a militant Catholic district, then takes increasingly twisty, almost spy-movie turns as other warring factions and sub-factions get involved in his would-be rescue and/or termination.

It’ll be interesting to see if Roadside Attractions can sell that tension to American audiences starved for intelligent action movies.

Another audience breakout was Ramin Bahrani’s “99 Homes,” which doesn’t yet have distribution but is likely to by the time it’s unspooled again in Toronto. Finally making a post-“Spider-Man” reappearance, Andrew Garfield plays an evicted homeowner who battles his way back to solvency by going to work for the guy who evicted him, Michael Shannon.

Of course, that rebound comes at a high moral price, in the tradition of apprentice-to-the-devil films from “The Firm” to “The Devil’s Advocate.” Critics are likely to resist the film’s nonstop emotional manipulation, but rank-and-file filmgoers in Telluride loved it, and its hammering home the still-timely financial crisis theme could make it the movie that launches a thousand editorial think-pieces.

6. Michael Keaton is going to get as much work as he wants for the rest of his life.
He’s that good in “Birdman.” The question is, will he pull out all the stops in trumpeting the story of why he went away and how he came back, as Bruce Dern did with the campaign for “Nebraska,” or play it cooler?

The fact that Keaton, unlike Dern before him, did not show up in Telluride might indicate the latter. Either way, audiences who see this bravura turn are going to be wondering why he hasn’t been cast as the lead in just about every movie made since he retired the batsuit.

7. Telluride doesn’t care if the ultimate Best Picture winner didn’t play their festival this year. Really.
And, yes, they know you don’t believe them. “We ignore it, completely,” executive director Julie Huntsinger swore of the pressure to program Oscar contenders. “The second we get concerned with that, we lose our focus, and no one comes anymore …

“It’s not a disingenuous comment. Someone [in the press] said that, and I took offense at that. We really want to show the best — and whatever happens as a consequence, great for everybody. If we don’t like it, it’s not going to get in … That’s a heartfelt answer.”

Co-founder Tom Luddy admitted that “last year is going to go down as an anomaly” and that the Oscar buzz was “louder last year. This is a more quiet year” — which is just the way they like it in red-carpet-free, party-averse Telluride.

Of course, if “Birdman” proves to not be too gonzo to win over the Academy after all, all bets for a major media re-convergence on Telluride 2015 are off.

For the record: A previous version of this story identified Roadside Attractions as Roadhouse Attractions. TheWrap regrets the error.