Too bland to be offensive, writer-director Lisa Joy’s talky sci-fi neo-noir “Reminiscence” is as corny and plain as star Hugh Jackman’s voiceover narration, which includes such intriguing, but empty observations as “The past can haunt a man. That’s what they say. And the past is just a series of moments, each one perfect.”

That maxim does not prove to be accurate, as you might expect given who’s speaking: private eye Nick Bannister (Hugh Jackman), who uses a science-fiction machine — part sensory deprivation tank, part virtual reality simulator — to help his clients relive their old memories. Nick has become obsessed with Mae (Rebecca Ferguson), a nightclub singer who suddenly disappears after she uses Nick’s memory-palace device. Unfortunately, there’s not much mystery in Mae’s vanishing act, especially given how neatly explained everything is through dialogue and/or carefully arranged master shots of handsome actors who appear engaged by, but never really invested in, what they’re saying.

“Reminiscence” is peculiar and often easy to watch, given its surprisingly robust budget and production design. There are also flashes of personality during the movie’s action scenes. But Joy’s dialogue — as you might expect from the co-creator of HBO’s “Westworld” — pushes the plot forward hardest, and while all that talk is quirky enough to be sort of charming, it’s also never smart or impassioned enough to be compelling. 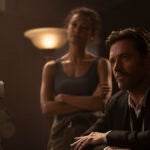 Nick’s cynical observations, along with some asides by his pessimistic colleague Watts (Thandiwe Newton), often distract from whatever’s on-screen. The cinematography by director of photography Paul Cameron (“21 Bridges”) is often polished enough, presented in pleasant wide angles, a subdued color palette, and with an appreciable depth of field. But it’s hard to get lost in Cameron’s images or Joy’s workmanlike direction given how often they’re overwhelmed by her flashy dialogue.

Characters tend to speechify at length, taxonomizing everything and every feeling they have as soon as possible. It’s enough to make one forget that there’s a whole sci-fi dystopia outside of Nick’s office, which is based in a stately and otherwise abandoned Art Deco–style bank. Also, he lives by The Sunken Coast, a seedy water-logged microcosm that’s controlled by local despot Walter Sylvan (Brett Cullen, “Joker”) and his scheming kid Sebastian (Mojean Aria, “See”).

Still, the main focus of “Reminiscence” is Nick’s frustrating quest to find Mae, a woman who clearly took advantage of him and then split. Sparks don’t even fly when they meet, partly because Jackman never seems to be interested in Ferguson as a romantic interest, but also because, after he first hears her sing, he compliments her voice, and she replies: “Four years I’ve worked here, and you’re the first to notice my voice.” That sort of calculating line sets the pace for the rest of the movie since it’s too clunky to be seductive, but also too self-conscious to be unlikable. 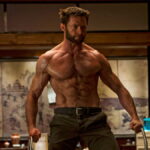 Also Read:
Hugh Jackman Shoots Down Wolverine Return: ‘Not on the Table’

Nick’s pursuit of Mae requires him to quiz various suspects, including crooked cop Cyrus (Cliff Curtis) and local crime boss Saint Joe (Daniel Wu). Both of these supporting characters threaten to pull the plot away from Nick; although they also talk like “Blade Runner”–loving film students, they never quite manage that Herculean feat. The movie’s set pieces also add intrigue, especially one extended memory palace session that’s presented exclusively with subjective camerawork, to simulate the point-of-view of one of Nick’s clients while they re-enact their past. We also get an unexpectedly intense fight scene involving a piano and an underwater “The Poseidon Adventure”–style rescue, though it’s ultimately not as thrilling as that description.

The best sci-fi and film noir ideas in “Reminiscence” are equally under-developed. There’s a lot of talk about how unhappy the characters are, as when Nick tells Watts that “what you have isn’t a life; it’s barely a living.” This presumably complements one of Watts’s earlier character-defining lines — “All kinds of s— gets swept up in the gutter” — but even that is the wrong kind of revealing. 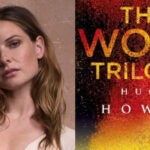 Joy’s dialogue tends to indicate a lot without really saying much, so the closest she comes to hooking viewers is when Mae asks Nick: “That machine of yours…how close can you get until the illusion is broken?” It’s a well-phrased question, but it doesn’t mean much, given that Nick never seems to be haunted by Mae. He’s obsessed with her in the same way that a mathematician pores over a tough equation, hopping in and out of his memory machine to find some detail or exchange that will crack the case. Jackman’s performance never deepens this threadbare material, and it’s often hard to tell if that’s because he’s too busy trying to make Joy’s dialogue sound naturalistic, or because he wasn’t given good enough direction.

Jackman’s tellingly absent from the most dynamic scene in “Reminiscence,” a conversation between Mae and Watts that’s also better directed than it is scripted. They talk about their mutual understanding of each other and try, in this way, to give Nick’s story some indirect perspective. But then Mae dips out of the story again, and it becomes clear that “Reminiscence” is just another puzzle box mystery whose intelligence is simultaneously broadcast by and limited by its criss-crossing flashbacks and speeches, none of which are as smart as they are busy.

“Reminiscence” opens Friday in U.S. theaters and on HBO Max.