(Spoiler alert: Do not read on if you have not seen “Respect.”)

Did Dinah Washington really lose it when she attended one of Aretha Franklin’s shows and heard Franklin sing one of Washington’s songs — as depicted in the new movie “Respect”? Not quite — but it did happen at someone else’s show.

In David Ritz’s biography of Franklin, “Respect: The Life of Aretha Franklin,” he writes that Etta James told him she was playing a small club in Providence, Rhode Island, when she heard Washington would be coming to her midnight show: “With that in mind, I decided to open with her big hit, ‘Unforgettable.’ I didn’t even get to the chorus when I heard this earth-shattering crash. Dinah had got up off her chair, swept all the glasses and plates off her table, and was pointing at me, screaming, ‘Bitch, don’t you ever sing the Queen’s songs when the Queen is right in front of you!'”

Later, James said, Washington came to her dressing room to apologize. “Sorry, I lost it for a minute, but look, girl, you learned a valuable lesson. If a star’s around, you don’t ever sing the star’s songs. Ever,'” she recalled.

According to the biography, Franklin had an encounter with Washington has well — after her show at a Detroit club, Franklin received a visit from Washington in her dressing room, where Washington allegedly began to criticize Aretha for the mess in the room.

“Aretha deeply resented the remarks and thought Dinah was acting like a diva,” Ritz wrote.

In the movie “Respect,” it’s Jennifer Hudson’s Franklin who starts singing one of Washington’s songs in a New York nightclub, prompting Washington (played by Mary J. Blige) to knock over a table. Instead of apologizing to her after, though, Washington rips into Franklin for trying to be a Washington-style jazz singer. 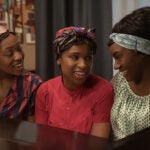 So, Washington did get heated when she heard one of her songs sung by someone else in a live show, but her anger was not aimed toward Franklin, at least in that instance.

The film hit theaters on Friday.