Cinematographer Emmanuel Lubezki was 0-for-5 at the Oscars three years ago, despite having photographed such remarkable films as “A Little Princess,” “Children of Men” and “The Tree of Life.” But now, after winning back-to-back Oscars for “Gravity” and “Birdman,” the man everyone knows as “Chivo” is going for his third consecutive win, a record, for Alejandro G. Inarritu’s “The Revenant.”

We’ve all heard about how difficult “The Revenant” was, and Alejandro told us, “It almost killed me.” Was it that tough for you?
It was really, really, really tough. But it was not a surprise. We knew it when we were working on the script, and when we went to see the first few locations. We completely knew that we were getting into something really complicated and physically tough. But that was part of the story — we were looking for that, and we made a conscious decision to get into that.

[Laughs] We also knew that as middle-aged filmmakers, we had just enough strength to get through this movie. It was now or never.

How did Alejandro first approach you about this?
He called me, way before we shot “Birdman,” and said, “I would love to do this movie with you. The script is very basic right now — it’s basically a revenge story, and that’s not what I want to tell. But there’s something here that I like about the early days of capitalism in America, the relationship between the humans and the land, the social class struggle…”

And he didn’t want to explain it all with dialogue. He trusts the audience to a point where he wanted to immerse the audience into all these emotions through visuals and the atmosphere and locations — the time of day, the amount of fog in the air, the colors and the textures.

Which puts a lot of pressure on you, as the cinematographer.
It puts the pressure on everybody: the costume design, the makeup, the locations. We had to create our geography and then take a journey through that geography.

Let’s talk about a couple of specific scenes. How did you plan and choreograph the Native American attack at the beginning of the film?
We wanted the attack to be very immersive. We want to plunge the audience into that environment with the characters. So we decided to use very wide lenses and smaller cameras that allowed us to move around. We called it an elastic shot, moving from the objective to the subjective.

Alejandro had a very clear map of how he wanted to start from the point of view of the audience, and then go to these characters, Leo [DiCaprio] and the Indian chief who’s looking for his daughter. The stories are very interconnected, which is why the shot almost doesn’t cut. You can see what’s happening, and then feel the desperation of these characters.

It’s the horror of war. We definitely didn’t want to glamorize violence — I’m a bit sick of that, because Hollywood movies overdo it. And that’s always a fear I have when I shoot violence.

What were the particular challenges of shooting the bear attack, which I understand was a combination of real actors, stuntmen and a CG bear?
The toughest thing is that when you have the empty canvas in front of you, there are so many possibilities. How can you create a language to tell the story of the bear attack? It took a lot of talking about it, watching a few examples of real attacks. We met a lot of [trained] grizzly bear actors, and decided we didn’t want to do it with bear actors, because they’ve been in captivity and they don’t even act like real bears anymore.

Our stunt guys were very good at allowing Alejandro to explore that and design the choreography. And then after many, many rehearsals, we shot it. When you’re rehearsing in the studio, the ground feels one way, and the weather and all is very controlled. But when you take that idea into a location that’s very complicated just to get to, you realize that everything you’ve been planning might not work 100 percent. 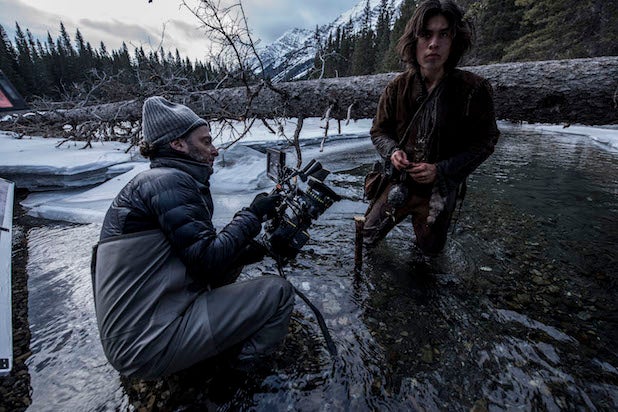 You shot “Birdman” to make it look as if the entire movie was one continuous shot. Do you and Alejandro like to give yourself challenges that make the job harder?
Well, we don’t do it for that reason, but yes. It’s not that we’re trying to climb the Himalayas or break any records. It just happened that the language that he picked, and what I collaborated to create, he thought it was the most efficient and the best way to express what he was trying to say.

Word is that you spent a lot of time waiting for the right light on location.
What was really happening is we were shooting in the Northern Hemisphere, in the northern latitudes where the sun travels very low, close to the horizon. We had very few hours of light. When we started, maybe four or 5 hours of usable daylight, and sometimes less than that.

Now, in a few scenes, yes, we had to wait for dusk because we were shooting with fire and we wanted to feel the immensity of the location. We waited for the light because Alejandro wanted to shoot at that mysterious time of day when you cannot shoot on film – it’s the time that happens after dusk, and film cannot see anything at all.

For a long time, we were living in the gap, that moment when a lot of filmmakers were not doing film anymore, and we were shooting shit with digital cameras — real crap, stuff that is not going to age very well. But in the last two or three years, digital cameras really became what they are right now, a real professional method of capturing images.

Do you prefer digital to film?
In the case of “The Revenant,” in the beginning I thought I was going to use film, and I had film and digital cameras. And little by little, doing tests, I realized that the images I was getting on digital cameras were so much better than film. Not having any grain between the audience and the actor was very exciting for me. We sent all the film back.

I’m not saying that I don’t like film. I hope that film doesn’t go away, that that directors and filmmakers always have that option. But I haven’t missed film in a while. That’s because I haven’t shot something that I thought needed film. The only thing I miss about film is the dynamic range, especially in the highlights.

Another reason not to lose film is to see 100 years of movies that are shot on film on film. That would be very sad if we were not able to see Woody Allen‘s movies or the “Godfather” movies on films anymore.

The Evolution of Leonardo DiCaprio: From 'Growing Pains' to 'Don't Look Up' (Photos)

For 30 years, Leonardo DiCaprio has managed to maintain an image as a handsome, Hollywood heartthrob and as one of the industry's most bankable and pedigreed performers. While he's consistently been at the top of the A-list for most of his career, the roles DiCaprio has taken have changed dramatically.  Here's how the actor has evolved over the years:
View In Gallery