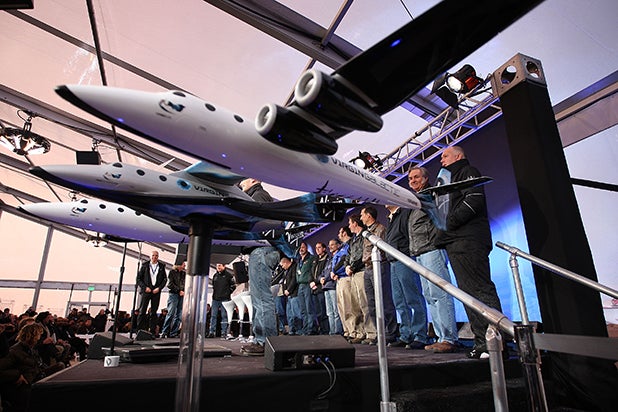 One of Richard Branson‘s Virgin Galactic spaceships exploded Friday over the Mojave Desert after suffering from a major malfunction.

The California Highway Patrol says at least one person was killed and another was injured, according to The Associated Press.

“During the test, the vehicle suffered a serious anomaly resulting in the loss of SpaceShipTwo,” Virgin Galactic tweeted later Friday.

See photos: Moguls on a Boat 2014: Where Rupert Murdoch, Ryan Kavanaugh, Clive Davis, Puff Daddy Had Fun in the Sun

According to the same report, the SpaceShipTwo rocket is manned by two pilots and was in the testing phase at Mojave Air and Space Port, located in the Mojave Desert northeast of Los Angeles.

Branson expressed his remorse via Twitter Friday afternoon, saying he is traveling to the crash region to join his staff. “Thoughts with all ‪@virgingalactic & Scaled, thanks for all your messages of support. I’m flying to Mojave immediately to be with the team,” he wrote.

Thoughts with all @virgingalactic & Scaled, thanks for all your messages of support. I’m flying to Mojave immediately to be with the team.

In Oct. 2013, NBC announced an exclusive series partnership with Branson and Mark Burnett to produce “Space Race,” a reality competition rewarding the winners with a trip on SpaceShipTwo.

TheWrap has reached out to NBC for comment regarding the future of the show.

The Kern County Sheriff’s Office, which is currently handling the investigation, has not immediately responded to TheWrap‘s request for comment.

Here are all of Virgin Galactic’s tweets on what they’ve called a “serious” in-flight anomaly:

During the test, the vehicle suffered a serious anomaly resulting in the loss of SpaceShipTwo. WK2 landed safely. (2 of 4)

Our first concern is the status of the pilots, which is unknown at this time. (3 of 4)

We will work closely with relevant authorities to determine the cause of this accident and provide updates ASAP. (4 of 4)