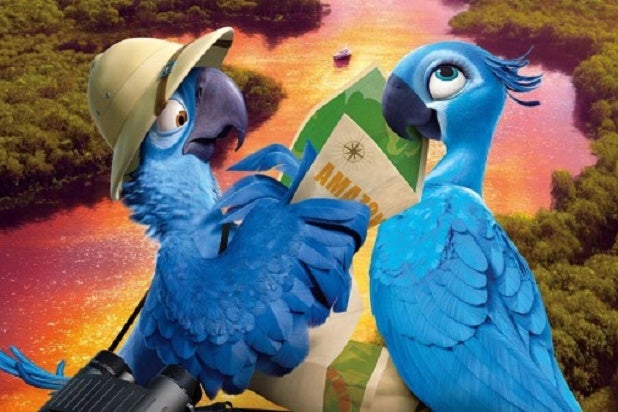 Fox’s “Rio 2,” runner-up at the domestic box office for the past two weekends, was the top-grossing film overseas with $48 million this weekend.

The animated musical from Blue Sky Studios raised its international total to $201.5 million, and is up to $276.8 million globally. It was in 66 foreign markets.

The family film, which features the voices of Anne Hathaway, Jesse Eisenberg and Bruno Mars, is showing staying power. It raised its total from China to $23 million with a $7.5 million weekend. It’s at $22.6 million in Brazil, where it’s in its fourth week and dropped just seven percent. And Mexico brought in $4.3 million to up the total there to $18.2 million.

“Captain America: The Winter Soldier” was third, with $35.3 million from 56 foreign markets.

Johnny Depp‘s “Transcendence” brought in $17.4 million from 28 markets, including $11.7 million from its day-and-date debut in China for Lionsgate.

“Ocho Apellidos Vascos” (Spanish Affairs), the Spanish culture clash comedy that Universal is distributing, was No. 1 in that country for the sixth consecutive week.

It brought in $5.8 million and with $52.8 million this weekend is now the highest-grossing Spanish film ever in that country. No date for a U.S. release has been set.

Even “Captain America: The Winter Soldier” couldn’t thaw the grip of Disney’s blockbuster “Frozen” in Japan. Disney Animation’s musical tale of sisters Anna and Emma stayed on top for the sixth week in a row there with $7.5 million — topping the $2 million that the studio’s Marvel superhero sequel opened with this weekend in Japan.

The country is the final, and has been by far the biggest, overseas market for “Frozen.” It’s brought in more than $104 million there, ahead of the $76.9 million the film grossed in Korea.

Globally, “Frozen” hit $1.12 billion in grosses this weekend, making it the sixth-highest grossing movie of all time, passing “Lord of the Rings: Return of the King” ($1.11 billion) and “Transformers: Dark Side of the Moon” ($1.2 billion). It’s also the highest grossing animated movie ever at the international box office, ahead of “Ice Age: Continental Drift.”