Riot Games, the gaming developer and publisher known for its popular esports “League of Legends” and “Valorant,” is growing its entertainment studio by hiring Brian Wright, a former Netflix executive, as the division’s chief content officer.

Wright will be responsible for leading the development of programming strategies for original film, TV series and animation for Riot Entertainment. Wright will also work closely with Spenley and the global leadership at Riot Entertainment to bridge relationships between the gaming and the entertainment industries and identify talent and creators to expand the brand’s IP. Creative, production, and business affairs will all report to Wright.

Riot Entertainment thus far has been expanding the world of its “League of Legends” brand, known as Runeterra, with multimedia projects across music, comic books and board games, and they’re also working on an upcoming animated series called “Arcane,” which ties into “League of Legends” and is an event series for Netflix.

“Brian is a dynamic leader with creative instincts that led to many shows that penetrated pop culture and delighted audiences around the world while working with the best showrunners, directors and creators in entertainment,” Spenley said in a statement. “He is the perfect visionary to shepherd Riot’s beloved IP, help create original content and build a first-class studio all while keeping true to our ‘player first’ ethos.”

“I am beyond thrilled to be joining Riot Entertainment,” Wright said. “The ‘League of Legends’ universe is some of the most imaginative and inspired IP known today — the ultimate playground to invite the world’s best storytellers. Working with Shauna and the team to build a cutting-edge studio is nothing short of a dream come true. A proof point of what’s possible can be found in ‘Arcane,’ Riot’s first animated series, which blew me away with its inspired storytelling, visuals and music. I can’t wait to bring more vibrant stories to players and fans around the world.” 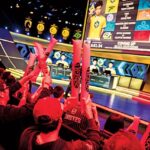 Before Netflix, Brian spent seven years at Viacom, rising to SVP of development across Nickelodeon and Nick @ Nite. He started his executive career at Greg Berlanti’s production company before spending two years at Lifetime.