Oscar voters often love it when beautiful models, or starlets accustomed to playing the one-dimension girlfriend roles, reveal that they can actually be serious actresses when given a chance. The transformation has worked for the likes of Jessica Lange and Charlize Theron in the past – and this year, Michelle Monaghan looks to be shaking up the perceptions of people used to seeing her in the likes of “Made of Honor” and “Kiss Kiss Bang Bang” with her tough, subtle work in James Mottern’s “Trucker.”

Yesterday, Roger Ebert gave the film four stars and announced, “Her performance clearly deserves an Oscar nomination.” Monaghan clearly remains a longshot in the category, but if nothing else a little buzz might tempt a few more viewers to check out the spare, finely-drawn, understated drama, which opens in a few theaters today and rolls out to more over the next few weeks. Considering that the film has been making the festival route for much of the last two years, the actress welcomes the attention. 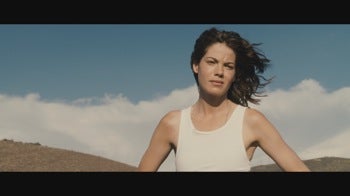 It’s been a long haul for this movie already, hasn’t it?
Yeah, the film has had a hell of a journey. I attached myself to it in 2006, and it took about a year to get financing. We made it in the summer of 2007, and the following April it went to Tribeca, and then we found distribution in 2008. So it’s taken a lot of dedication on the part of a lot of people to see it through to this point.

What attracted you to the part?
Honestly, this is the role of a lifetime for me. She’s a very honest woman, a real woman, very unsentimental. She’s not a victim, and she’s not a one-dimensional character.

The director, James Mottern, came from documentary films and had never made a feature before. Were you comfortable with him from the start?
I was. I’ve worked with a lot of first time writer directors. Somebody might say I was taking a risk working with him, but I looked at him as taking a risk on me. And more importantly, we just had the same vision for the film. He was real clear about how he wanted to make the film, which was exactly my sensibility.

What is that sensibility?
He wanted to have an early ‘70s quality to the film. Also, there are certain scenes you could really play up and make the obvious choice. She could play the victim, the character could be really sentimental, there were moments where there could be a lot of melodrama. And James didn’t want to do that. In fact, he wanted to do the exact opposite. And he really wanted to allow the camera to linger a lot. Most directors today don’t give you a chance to watch the actors act, because they’re always cutting to the dialogue. In this movie there are some real quiet moments, solitude, with all the characters.

He may have wanted the camera to linger – but it strikes me that on the kind of shooting schedule you had, there was certainly no time at all to linger between shots.
That’s a very good call. You’re exactly right. We couldn’t have been more pressed for time. You let the camera linger once a scene is over, you’d see dollar signs ticking. It’s a testament to James. It’s not easy to direct a feature film in 19 days, and yet he managed to do it.

Did you ever wish you had more time to prepare, or did the schedule help immerse you in that world?
It was an immense benefit. Initially, I thought, how on earth am I gonna be able to make this in 19 days? But we were so immersed in it that everything was on the surface, and every day the feelings and emotions were so palpable. We ate, breathed and slept it. And after we finished, it was so sad, really. I wish I could shoot more films like that, even though it probably took about six months to come down from it afterwards.

When the movie was in the very early stages, I understand that you and your husband sent James a montage of photos you’d shot in the desert.
That’s right. My husband and I were on our way to Palm Springs for the weekend, and I saw an exit for highway 60, which runs through Riverside. My husbands a great photographer, and I said, “Why don’t we cruise through Riverside, take some photos and capture (the character) Diane?” It was really just fun for my husband and me. But then I put some music to it, and thought, Should we sent this to James, or is that really lame? He might think, This isn’t Diane at all—screw you, I don’t want you in my film.

I didn’t realize it when I sent it, but it ended up coming to him on a day he found out they’d lost their producers and there was no money. So I think it gave him some hope.

Why was it important to you to take truck driving lessons and do the driving yourself?
Her job is so integral to who she is as a person, and why she is the way she is, that I knew that spending time in that culture and learning her job would inform me so much as an actor. And it was such an honest character that I really felt it deserved to be played with all the honesty it could be. There was no question that if I couldn’t get my (truck) license I wasn’t going to make the movie.

Was it touch-and-go when you were learning?
For sure. Are you kidding me? Believe me, nobody was more surprised than I was when I got my license. I called James nearly in tears, saying, “I got it I got it, we can make a movie!” And he was like, “Of course you got it. Why do you think we’re in pre-production?” I guess he had a little bit more faith in me than I had in myself.

What were the biggest surprises you learned from spending time with real truckers?
I went on short hauls with them, and I was completely shocked by how dangerous a job it really is, especially for women. Also, I think people have a misconception that truckers may have a lack of intellect, or they’re truckers because they don’t have anything better to do. That couldn’t be further from the truth. Most of the truckers I met had creative backgrounds, and all of them had degrees. They just loved being on the open road, so they chose to be truckers. And the women aren’t all butch, like people think they are. They’re all very strong, independent, fierce women, but they’re all feminine, too.

Between the action in the film and the skimpy outfits the put you in, it must have been a pretty physical movie for you.
Yeah. While I was going to truck driving school, I would also go to the gym and lift weights, because you have to have some muscle to shift those gears. I pumped some iron, so to speak. I’m pretty gangly, but there’s some muscle in there somewhere. I just had to get it to come to the surface.

How are you reacting to the awards talk these days?
It’s incredibly exciting, obviously, to hear that buzz. But I’m waiting for people to go see the movie. (laughs) I’ll reserve an opinion until people have actually seen it.