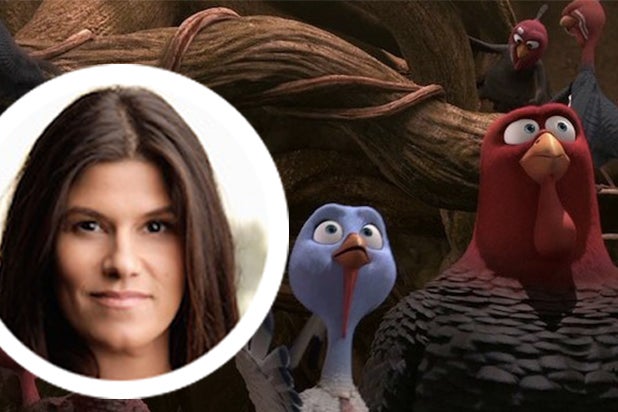 Relativity Media has big ambitions to shake up Hollywood by producing the kind of mid-budget movies that major studios have eschewed in favor of massive blockbusters.

As president of production at Relativity, Robbie Brenner  is playing a critical role the company’s transition from financier to full-fledged studio.

After a period of months that saw the company’s film slate shrink as it exchanged one financial backer, Elliott Capital Management, for a new consortium of investors led by billionaire supermarket magnate Ron Burkle, Relativity is ramping up production on an ambitious array of projects.  It will field between 10 to 15 films annually, including Scott Cooper’s thriller “Out of the Furnace,” a remake of “The Crow” and the dysfunctional family comedy “The Most Wonderful Time.”

The company’s latest venture, “Free Birds,” a co-production with Reel FX, represents a bold attempt to shoulder in on the animation market. It debuts Friday and features the voices of Owen Wilson and Woody Harrelson.

TheWrap spoke with Brenner about the types of films that Relativity loves to back, the reason it’s banking on projects that target families and “Baby Boomers,” and what the studio has planned for its long-gestating overhaul of “The Crow.”

How do you decide to back a particular project?
For me, it’s all about the story. That’s what elevates everything else. In the world we’re living in, people have so many distractions that unless something sticks out as unique and interesting, and can be part of watercooler conversation, they don’t show up.

It also has to be a movie that can open on 2,000 to 2,500 screens. A project has to have the ability to go wide, if we’re going to make it. It has to have that commercial appeal.

What makes Relativity’s approach to “Free Birds” different from the way other studios tackle animated productions?
Most animated movies are being made for between $150 million to $200 million, but we made it for a price. Reel FX is such a fantastic, cutting edge company that it cost $55 million to make. By keeping everything in-house, they held costs down.

Are you worried that the market for animation has become over-saturated, now that nearly every major studio has launched an animation division?
Parents are always looking for things to do with their kids, so I think it can never get over-crowded. I have two children myself, and nearly every weekend I’m looking around and thinking when’s the next movie going to come out that’s kid friendly? Often it’s four to six weeks between family movies.

There are a lot of great names attached to “Out of the Furnace” — director Scott Cooper, Oscar winners like Christian Bale — are you positioning the film as an awards contender?
We’re incredibly passionate about it and the storytelling is as good as it gets, but you never know. This is a very tough year. Some Oscar analysts say it’s the toughest race ever. That said, we’re ever proud of the movie, the performances of Woody [Harrelson] and Casey [Affleck] and Christian and what we’ve achieved.

We see it as really elevated filmmaking that’s going to appeal to older people and younger people. It’s a nostalgic throwback to films like Michael Cimino’s “The Deer Hunter” and Scorsese.

In addition to your work at Relativity, you’re a producer on “Dallas Buyers Club.” It’s a movie that deals with the early days of AIDS epidemic, what about the story of Ron Woodroof and his unlikely career as an activist, made you think this would be compelling?
It’s a David and Goliath story. You don’t have to be a homophobic, racist, rodeo rider to relate. It’s about a man who finds greatness in himself by bumping up against adversity.

What made you think of Matthew McConaughey for the lead? Wasn’t he best known at the time for romantic comedies?
He’s from Texas, he’s charismatic and thoughtful, all qualities that Ron had. I just had this gut feeling, and this was pre-“Mud” and before the picture he did with Billy Friedkin. I knew he had the depth to be able to do this. He’s in a different place in his career. He’s in his forties and he’s going to be a father and I think that he wants to leave an indelible mark on the world with his work.

Older moviegoers, so called “Baby Boomers,” have helped make “Gravity” and “Captain Phillips” box office hits. Do you think Hollywood needs to do more to attract this audience?
Absolutely. When everything is so available with the internet and Twitter and Tumblr, kids and young adults can become easily distracted. As an audience, it’s harder to rely on them, so I think it’s good business to double down and make movies that bring in older audiences, but still appeal to younger ones. “Captain Phillips” and “Gravity” certainly did that and we’ve done that before with “Act of Valor” and “Limitless.”

How would you define a Relativity movie? What kinds of projects are you interested in producing?
A lot of studios are either making huge tentpole movies about Superman and Batman or they’re making micro-budget movies. We live in the middle. We’re interested in making good movies with good filmmaker for between $20 million to $60 million.  Unlike bigger studios with layers and layers of people, we’re lean and mean.

We also have a lot of repeat business filmmakers and actors, who come back to us time and time again. Take [novelist] Nicholas Sparks. He could go anywhere he wants to, but we’re making our third with him. Or Scott Cooper. I think he’d tell you he had an incredible experience on “Out of the Furnace.” We supported his vision, we let him make the movie he wanted to make and we didn’t test it to death.

There’s a lot of buzz about Relativity’s remake of “The Crow,” particularly among fanboys. Why did you think this was a film that could benefit from a reboot?
After a couple of years of trying to find right script, I think we found a great one with Cliff Dorfman. We went back to the graphic novel, which has all of these wonderful elements. There’s great mythology and great imagery, and it’s just very grounded. I don’t want to say it’s an anti-superhero movie. But it’s very real and character driven and we’ve brought on James O’Barr, who wrote the graphic novel, as a creative consultant.

Were you disappointed in the reception for “Don Jon”?
The movie will be a success for our company and it will make a profit.

We’re absolutely thrilled with movie and we did it because we thought it was different and fresh and unique. But it’s also important to establish relationships with talent and and we wanted to have a relationship with Joseph going forward. He couldn’t have been more pleased with the support we gave him. We embraced the movie for what it was and we didn’t try to sell it in a different way.

What about “Paranoia”? Can you take away any lessons from the film’s failure last summer?
We were disappointed in the performance of “Paranoia,” but mistakes will happen as we continue to establish our identity as a studio.

How would you rate Relativity’s success at forging that identity?
We’re building a studio from scratch here. We’ve only been distributing movies for three years and I think if you asked anybody else where they were three years into their journey they’d tell you we’re doing a great job. Sometimes we don’t score the touchdown. Sometimes we fumble. But that’s part of building something fantastic.