The Robert Durst murder trial isn’t always super exciting, but you’d think the guy accused of murder would be on the edge of his seat — or wheelchair, as the case may be — for every second of testimony.

But during Tuesday’s hearing, Durst appeared to nod off during witness testimony.

In the short video, you can see Durst’s attorney, David Chesnoff, walk up behind him and place his hand on Durst’s back. Durst then appeared to perk up, as if he had just been awoken. Judge for yourself in the video below.

On Tuesday, the court heard testimony from attorney Lev Ginsburg, who represents Lynda Obst, who testified on Monday. The court then heard recorded testimony from Susan Berman’s ex-boyfriend, Paul Kaufman.

At the start of Tuesday’s proceedings, Durst’s defense asked for a mistrial, citing Durst’s medical condition. The judge denied that request. 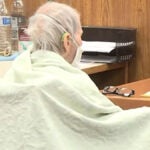 Robert Durst was acquitted of murder in Texas after he said he killed and dismembered his neighbor, Morris Black, in self-defense in September 2001. He is also suspected of killing McCormack, who disappeared in New York in 1982 — however, Durst was never charged. 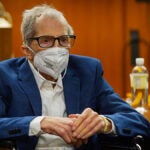