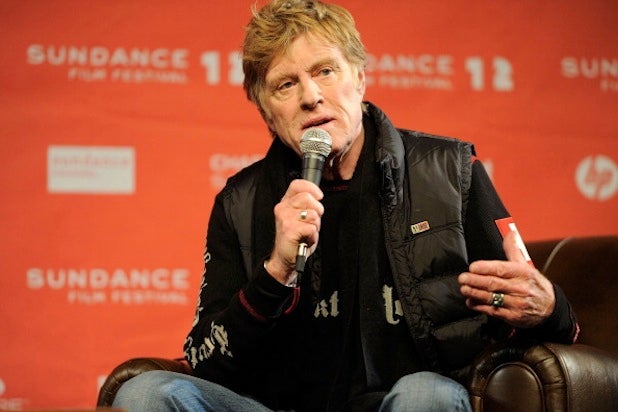 Robert Redford lobbed a blame bomb at his “All Is Lost” distributor Roadside Attractions on Thursday, suggesting that he may have been snubbed for a Best Actor nomination because the film “suffered from little to no distribution.”

In Redford’s opening remarks on the first day of the Sundance Film Festival, the veteran actor lamented: “We had no campaign to help us cross over to the mainstream. I don’t know what they were afraid of. They didn’t want to spend money or they were incapable.”

In one of the most competitive races in ages, Redford missed out on a nomination in favor of Christian Bale (“American Hustle”), Bruce Dern (“Nebraska”), Leonardo DiCaprio (“The Wolf of Wall Street”), Chiwetel Ejiofor (“12 Years a Slave”) and Matthew McConaughey (“Dallas Buyers Club”).

While Roadside Attractions didn’t shell out for a lavish awards campaign like the major studios did for “Gravity,” “American Hustle” and “12 Years a Slave,” Redford may want to look in the mirror: The actor did little to no campaigning for his tour-de-force performance in “All Is Lost,” allowing writer-director J.C. Chandor to stump for the film in his place.

“Would it have been wonderful to be nominated? Of course, but I’m not disturbed by it. I’m fine,” Redford said in front of a packed house at the Egyptian Theater.

The Sundance founder did his best to keep the attention on the 30th anniversary of the festival, saying “I don’t want it to get in the way of why we are here.”

“These films are reliant on campaigns. It can get very political,” said Redford, who reminded the crowd that Hollywood is a business and one he respects.

“The film I made with J.C. Chandor is something I’m very proud of. It was for me a pure cinematic experience. For me as an actor, it gave me a chance to go back to my roots,” said the 77 year-old actor, who has only been nominated once before as an actor for his work in the 1973 caper “The Sting.”

Roadside Attractions chief Howard Cohen and parent company Lionsgate did not immediately respond to TheWrap’s requests for comment, though we will update this post if and when they do.