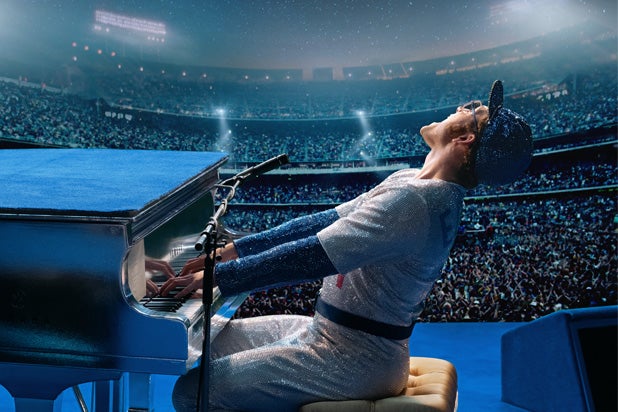 Well, never mind those “Bohemian Rhapsody” comparisons. The Elton John musical “Rocketman,” which premiered to a thunderous ovation at the Cannes Film Festival earlier this month, may be the second rock-related movie in the last year in which director Dexter Fletcher had a hand, but the two films are dramatically different in ways that for the most part are good for “Rocketman.”

“Bohemian Rhapsody,” which Fletcher stepped in to finish after original director Bryan Singer was fired, acted like a standard biopic with concert and recording scenes thrown in. “Rocketman” takes a wilder, bolder approach: It’s a full-fledged musical, using dozens of Elton John songs to tell his life story in a way that freely mixes reality and fantasy.

This is a jukebox musical for the big screen, “Mamma Mia!” forced into a vaguely biographical form or one of the Broadway shows that use an artist’s music to tell their story, among them “Jersey Boys” and “Beautiful: The Carole King Musical.”

But it’s about Elton John, so that means it’s bigger, wilder, more extravagant and more excessive than those works. Sometimes that means it’s more fun, too, but it can also be a melodramatic slog when it’s not embracing the craziness of its musical numbers. And some of those numbers, to be honest, are far more diverting than others.

It’s safe to say that not much of what we see onscreen in “Rocketman” bears much resemblance to what happened in real life, but it’s not supposed to — taking a cue from a guy who embraced fantasy and escape in albums like “Goodbye Yellow Brick Road” and “Captain Fantastic and the Brown Dirt Cowboy,” it whips up a fantasia in which “The Bitch Is Back” becomes a childhood neighborhood singalong and “Tiny Dancer” expresses Elton’s anger at his writing partner, Bernie Taupin, going off to get laid at a party.

(I guess this is the second-best use of “Tiny Dancer” in a major motion picture, though it’s a distant second to Cameron Crowe’s use of the song in “Almost Famous.’)

Also Read: Cannes Attendees, Listen Up: Here's How You Can Watch the 'Game of Thrones' Series Finale in France

As someone who hated “Bohemian Rhapsody” for its appalling factual misrepresentations in the service of giving Freddie Mercury’s life a more conventional movie arc, I can respect a biopic that announces from the start that it’s not to be taken seriously as an account of what actually happened. So while I struggled with a narrative that uses songs years before they were written, I know the rules of this particular game — and if what we see onscreen has a little crazy poetry in it, and it captures a bit of how things might have felt to Elton way back when, that’s all that matters.

The framing device here is a trip to rehab, with Elton telling his life story to a group of fellow alcoholics and addicts. As it turns out (and as we see over the next two hours), his father was horrible and cold, his mother was horrible and selfish, his manager and lover John Reid was horrible and uncaring and Elton himself was pretty horrible too, though we like him because he’s Elton John.

And the real problem, it turns out, is that Elton could never really love himself, a diagnosis we pretty much knew was coming all along, and one that requires a few too many scenes of drinking, drugging and self-loathing along the way.

By the way, this is now the second recent movie, again after “Bohemian Rhapsody,” in which John Reid is depicted in a highly unfavorable light, with Richard Madden taking over the role that Aidan Gillen played in “BoRap” and giving it a glowering intensity that extends to a significant if not terribly explicit gay sex scene. (And it’s the second recent movie to distort John Reid’s dealings with his clients, though I guess I need to stop harping on that kind of stuff.)

Because Elton wrote the music to his songs but Bernie Taupin (generally) wrote the lyrics, “Rocketman” attempts the tricky task of trying to locate autobiography in lyrics that were written by somebody else. At times it works to create genuinely touching, emotional moments, none more so than the scene in which Elton writes his first great song, “Your Song,” as his mother, grandmother and Bernie realize what he’s accomplishing in front of their eyes.

And sometimes, as was always true with Elton John’s music, the lyrics are simply secondary to the melodies and the spectacle — and in this case, secondary to the dazzling and frequently berserk choreography.

Egerton does his own singing in the film, and he does a fine job that isn’t an imitation. (If it were, it wouldn’t be a good one — he does the songs well without capturing the specific tone of Elton’s voice. And he persuades us that he’s some version of Elton, even though he never really looks like the guy, either.) Jamie Bell is in many ways the voice of reason as Bernie Taupin, who comes across as the true love of Elton’s life (though not in that way).

It’s all grand and fun and corny, a musical fantasy that reaches for the sky and gets there often enough to make it diverting but also frustrating. The recent years have seen a number of affecting indie musicals, from John Carney’s “Once” and “Sing Street” to the upcoming “Blinded by the Light,” and “Rocketman” is bigger and bolder than that — so big and bold, perhaps, that it can be harder to find the heart.

The Cannes premiere audience, though, was nothing but enthusiastic. With Elton in the house, they roared when the film ended with a reconstruction of the “I’m Still Standing” video, which was shot in Cannes, and then roared some more through the credits, and then kept roaring while Elton, Fletcher and the cast took their bows.

Let’s just say that a quick rendition of “Can You Feel the Love Tonight” wouldn’t have been out of place.