"Kick-Ass," the ultra-violent superhero flick that hits theaters Friday, was riding a wave of glowing Internet buzz — until it crashed into a cranky critic with roots in the old-school media. Roger Ebert (no slouch when it comes to Twitter, as TheWrap previously reported) generated a swarm of controversy this week over his takedown of the Lionsgate film.

Beyond the film's aesthetic 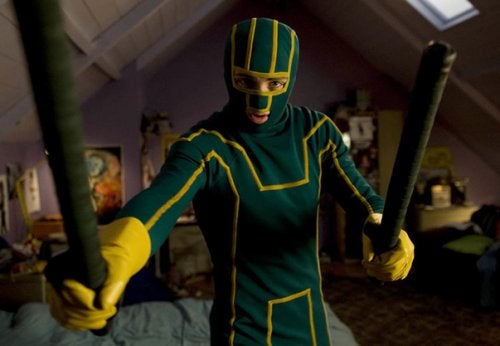 and artistic merits, Ebert was especially troubled its violence, much of it coming at the hands of a potty-mouthed 11-year-old girl. In addition to slicing and dicing baddies, the character in question, Hit Girl (Chloe Grace Moretz), is beaten to within an inch of her life and shot in the chest by her father (Nicolas Cage) while wearing a bullet-proof vest.

"Shall I have feelings, or should I pretend to be cool? Will I seem hopelessly square if I find 'Kick-Ass' morally reprehensible and will I appear to have missed the point?," Ebert wrote in his one-star review this week.

Of course, in announcing so publicly that he had gotten over Ebert's criticism, Mintz-Plasse essentially proved the opposite.

In the midst of all the fury, TheWrap takes a look at some of the reactions to "Kick-Ass" and the Ebert controversy sprouting up across Twitter and throughout the mainstream media.

The "It's Awful, It's Reprehensible" Camp

"I started hating this movie around the midpoint. And while Hit Girl's single usage of a c-word more commonly heard in Britain than in America has generated some controversy, the more pressing issue is how stupidly relentless the gore is, from beginning to end." — Michael Philips, The Chicago Tribune

"Yeah, it does bother me that Moretz's character, Hit Girl, and her fellow amateur superheroes rack up a body count in the high dozens." — Dana Stevens, Slate

"We never thought that we would say this about a movie: but Kick-Ass is too violent." — Sci-Fi Movie Page.

@frontierwoman: If I want to see 11 year olds swearing, shootin & stabbin people I'll nip over the road to the other council estate, thanx. Sheesh #Kick-Ass

@paulidin: I'm glad Ebert said it. I lose nerd cred but the Kick-Ass comic and movie both horrify me. I "get" it, but don't like it.

"Would I want to see an 11-year kid, male or female, whacking folk in real life? Of course not. But Hit Girl and 'Kick-Ass' are so removed from reality that a viewer can appreciate the character for the clever conceit that it is. The critics need to chill." — Leah Rozen, TheWrap.com

"I have to say it is a little sad to see [Ebert] go the route you did in your KICK ASS review. And don't worry, while I suppose you'll never really just get KICK-ASS … You're no square in my book. But you may be in danger of being a 'grown up'." — Harry Knowles, Ain't It Cool News

"Although Chloe Grace Moretz's foul-mouthed portrayal of the plucky Mindy has already drawn fire in the blogosphere, Mindy's self-reliance and confidence result in a weirdly reassuring portrait of a young girl who's able to defend herself." — Ann Hornaday, The Washington Post

"Ever since audiences got a pervy taste of Kick-Ass at July's Comic-Con, tight-asses have been nervously clenching … the movie belongs to Moretz, whose sensational performance will be talked about for years." — Peter Travers, Rolling Stone.

@deekgeek: Not down with Ebert's kick ass review. re: hit girl it seems very sexist and ageist

@ebertchicago: Essential "Kick-Ass" defense: "You don't get it, 'cause you're not me."

@ebertchicago: Let me get this right. I don't laugh as an 11-year-old girl gets the shit beaten out of her, so that makes me out of touch.