Roger Stone, a self-described “dirty trickster” and ally of former president Donald Trump, responded Friday to the news that Snopes’ co-founder David Mikkelson was suspended for suspected plagiarism. Stone has been a frequent target of Snopes’ fact-checking and, unbeknownst to him, cited one of Mikkelson’s pseudonymous bylines in two of his books.

“Everything Snopes has ever reported regarding me has been boilerplate bulls—.” Stone told BuzzFeed News Friday.

Mikkelson’s problems began after a journalist alerted the fact-checking outlet to suspected plagiarism, then published a full review in BuzzFeed News. Earlier this month, Snopes retracted 54 stories and suspended David Mikkelson, who used a pseudonym, his own name and the Snopes byline to publish the pieces. 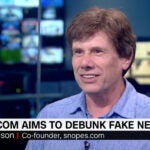 The conservative strategist referred to pieces published under one of Mikkelson’s assumed names, Jeff Zarronandia, in two of his books: “The Making of the President 2016” and “The Myth of Russian Collusion: The Inside Story of How Donald Trump REALLY Won.”

According to what former Snopes managing editor Brooke Binkowski told BuzzFeed News, Zarronandia was an “alt” for Mikkelson.

“He used to write about topics he knew would get him hate mail under that assumed name. Plus it made it appear he had more staff than he had,” she said.

Mikkelson, who remains an officer and 50% stakeholder in Snopes, did not immediately return a request for comment on Stone’s assessment or inclusion of the pseudonyms in his books. He released a statement earlier this month saying, “The results of our internal audit confirmed that I engaged in multiple serious copyright violations of content that Snopes didn’t have rights to use. There is no excuse for my serious lapses in judgement. I am sorry. I have given full authority to our managing editor, Doreen Marchionni, to take any measures needed to address these issues.”