Roku and Saban Films have struck a deal in which select films from Saban’s 2021 slate will stream on the Roku Channel within three months after its theatrical run.

The films will stream for free on Roku’s ad-supported Roku Channel, and not only is it yet another shift in the windows for theatrical films, it’s also the first pay-one licensing agreement for Roku. And the titles will be available in the U.S. and Canada after a theatrical run and a home entertainment release.

The first film to premiere under the agreement will be “Echo Boomers,” which stars Patrick Schwarzenegger and Michael Shannon and will release on June 15. Other titles included are “Happily” with Joel McHale, “Percy VS Goliath” (US only) with Christopher Walken, Christina Ricci and Zach Braff and “Under the Stadium Lights” with Laurence Fishburne. More titles will be announced at a later date. 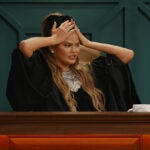 Also Read:
Roku Will Release 30 Former Quibi Shows on May 20

“Streaming has become an incredible way to experience movie-making magic from the comfort of your own home and we are thrilled to bring an extraordinary lineup of entertainment to The Roku Channel and America’s No. 1 TV streaming platform,” Saban Films president Bill Bromiley said in a statement.

“Saban Films is a great partner with a history of creating standout films,” Rob Holmes, VP of Programming for Roku, said in a statement. “This first-of-its-kind agreement allows us to bring these compelling films exclusively to our large, engaged audience for free, and to build upon the incredible growth of The Roku Channel.”

The Roku Channel reached an estimated 70 million people in U.S. households with its latest growth in Q1 of this year. The ad-supported service has 40,000 free films and 190+ free live linear television channels.