Florida Governor Ron DeSantis dismissed systemic racism in America on Thursday night in response to President Joe Biden’s promise to tackle it during his congressional address the night prior.

“Well, it’s a bunch of horse manure. I mean, give me a break,” he told Fox News’ Laura Ingraham during her “Red State Trailblazers” town hall. “This country has had more opportunity for more people than any country in the history of the world and it doesn’t matter where you trace your ancestry from. We’ve had people that have been able to succeed and all and here’s the problem with things like critical race theory that they’re peddling. They’re basically saying all our institutions are bankrupt, and they’re, they’re illegitimate.”

He went on, “How do you have a society if everything in your society is illegitimate?” 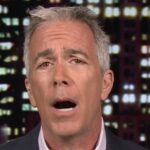 DeSantis also said that in Florida, federal money can’t be spent to promote what he considers the “Marxist ideology” of critical race theory in public schools.

Ingraham segued that comment into discussion of statewide coronavirus lockdowns and the remote learning that followed, but online, some who watched the segment weren’t as quick to pivot away from DeSantis’ comments on race.

Writer Slava Malamud tweeted, “Another idiot Republican bandying the word ‘Marxist”‘ about as code for ‘sh– I don’t like’ and not understanding just how Soviet his insistence on white-washing his country’s history is.”

Former GOP congressman Joe Walsh, who has been publicly apologizing for his past comments and beliefs about race in America, also weighed in: “DeSantis is wrong. But understand, this is the answer you MUST give if you’re a Republican running for office. When I tell my conservative talk radio audience that I think there is STILL systemic racism, EVERY Republican voter disagrees with me. Every one.”

Last month, Omari Hardy, a Florida state representative who is Black, called out systemic racism in the state by showing how Black and Latino seniors were vaccinated at disproportionately lower rates than whites. “It’s hard to survive a pandemic while being Black or Hispanic in Ron DeSantis’s Florida,” Hardy wrote.

Check out DeSantis-Ingraham interview below: