Jason Biggs’ time as the king of cinema pie scenes is coming to an end.

The seminal scene in David Lowery’s new “meaning of life” film “A Ghost Story” features a heartbroken Rooney Mara sitting alone on the floor of her kitchen devouring a full pie in real-time take as her dead husband (Casey Affleck) watches from afar as a ghost.

It’s a nine-minute wide shot of Mara in profile that plays out like a single shot … for nine minutes. 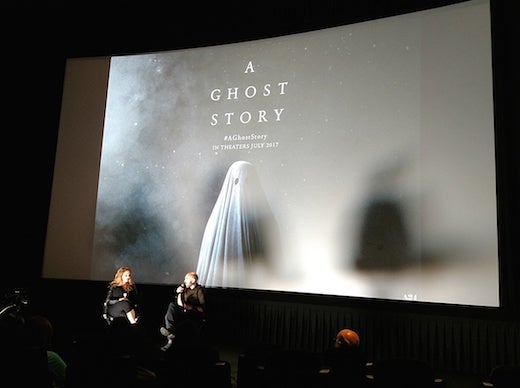 “I definitely expected people to walk during it,” Lowery recently told Ethan Alter of Yahoo Movies. “It comes 20 or 25 minutes into the movie, and it’s the longest shot in the movie … it is an opportunity for audiences to decide if they’re with the movie. If they want to bail, that’s a great time to leave,” he added.

Lowery, who wrote, directed and edited the film, spoke to a packed Theatre 4 at the Arclight Hollywood on Tuesday night. The conversation and screening were hosted by Adobe, Lowery’s post-production workflow of choice.

Considering Adobe’s involvement and the glacial pace of the first act — where in addition to the pie scene several other locked off shots fill the screen for extended periods — instead of “bailing,” the Party Report wondered if the hook was that Lowery had forgotten to edit the movie at all.

The “Ain’t Them Bodies Saints” director revealed that Mara’s pie-binge was shot in a single take. Her dietary choice? A vegan chocolate pie, that Lowery took a few bites of at the end.

After being compelled into posting his recent studio film “Pete’s Dragon” via Disney’s post-production infrastructure (the Avid system), Lowery was refreshed to complete all of his “Ghost-post” in Adobe Premiere Pro and After Effects.

“Most of it was cut in my laptop while traveling,” Lowery said. “The bulk of the film came together in a month.”

As for being a nearly one-man-band, he copped to sharing the slack self-motivation shared by many creatives.

“(I would) procrastinate all day. Watch movies. Go running,” Lowery said. “And then at night I’d go ‘I’ll just look at one scene.’ Then I’m up all night cutting.”

After a debut at Sundance this year, the A24 release is in theaters now.

Criticizing food can land you in court, as Oprah Winfrey and others have discovered

Top TV talents including Oprah Winfrey have been hit with food libel lawsuits, otherwise known as "ag-gag" or "veggie libel" lawsuits. Most of these claims fail, but they are expensive to fight. Here's a look at some recent food lawsuits.