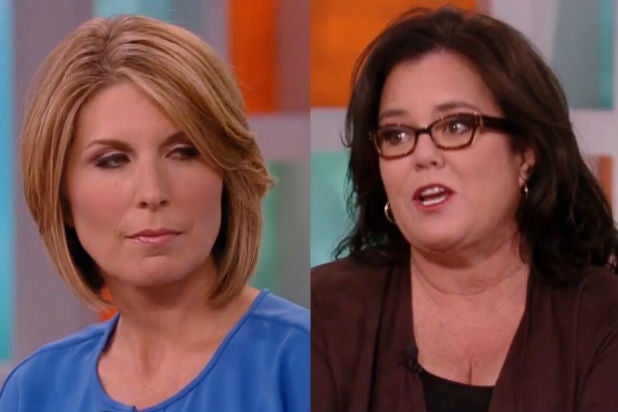 “There isn’t any feud, yet,” O’Donnell told ExtraTV at her Rosie Theater Kids Gala on Monday night.

Also read: ‘The View’ Reviews: Is Rosie O’Donnell Better The Second Time Around or Just Boring?

“I don’t think there’ll be a feud,” O’Donnell said. “There wasn’t a feud between me and Elisabeth [Hasselbeck] until that day and then that feud was over because I left, right? It takes two to fight, and I chose not to.”

Wallace introduced herself as a “Republican” during the Season 18 premiere of “The View” last week. She fills the void left by Hasselbeck, who jumped Fox News, as the conservative voice on the all-female panel.

See video: ‘The View’s’ Rosie O’Donnell, Co-Hosts May Have Set a Record for Saying ‘Vagina’ in One Segment

“So there won’t be fighting,” O’Donnell said. “We might disagree about things like whether we should go to war in Syria, my answer would be no, unequivocally no, but other people have different feelings and that’s what the show’s about.”

Wallace, who was the sole “View” co-host in attendance at Rosie’s gala, also rebutted the feud claims.

“It’s so funny to me. I come from the world of politics where the things that actually happen never get out,” Wallace said. “Now, to be in the world of TV where something that never happened is everywhere, I’m still adjusting.”

See video: ‘The View’ on Joan Rivers’ Doctor Selfie: ‘What’s Gonna Happen When You Go to the Gynecologist?’

So far this season, the co-hosts of “The View” have had minimal on-air disagreements. Wallace has even sided with O’Donnell on several occasions, including coming out in favor of President Obama after his national address concerning ISIS.