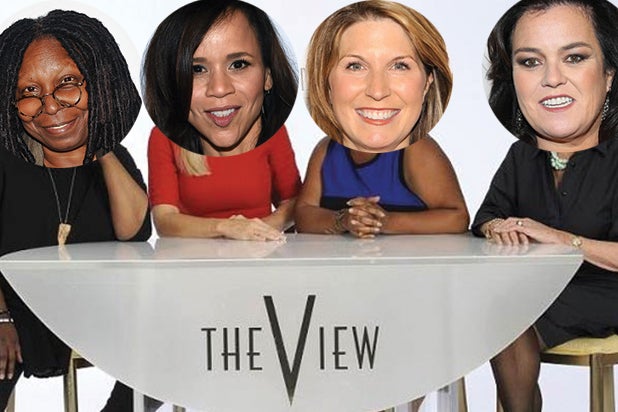 Rosie Perez and Nicolle Wallace have officially joined moderator Whoopi Goldberg and Rosie O’Donnell on the upcoming 18th season of “The View.”

While McCarthy and Shepherd’s departures were confirmed in June, ABC refused to speculate about potential replacements. However, TheWrap learned the network actually tested a shortlist of replacement candidates in August. Wallace was among those women who tested with the network, but Perez was not.

Wallace, a conservative author and political commentator, previously served as George W. Bush’s communications director during his Presidency and 2004 re-election campaign. She also served as a senior adviser to the McCain-Palin 2008 Presidential campaign and is the author of “Eighteen Acres,” a novel following the first female President of the United States.

“I am honored to join the tradition of compelling conversations that has been the signature of ‘The View’ for the better part of two decades,” Wallace said in a statement. “I have watched ‘The View’ for many years and now to be seated alongside three women that I have admired is both humbling and incredibly exciting.”

Perez, who got her first big acting break in Spike Lee‘s “Do the Right Thing,” was nominated for an Oscar for 1993’s Peter Weir drama “Fearless.” While she’s a household name, her talk show experience is limited. In addition to serving as guest co-host on a February episode of “The View,” Perez hosted an episode of Anderson Cooper’s short-lived series “Anderson Live” in 2013.

“I am beyond thrilled, honored and completely surprised that I’ve been asked to join ‘The View,'” said Perez. “Knowing that I’ll be in the company of Whoopi, Rosie and Nicolle, three very smart and engaging women that I have an immense amount of respect for, makes it even more unbelievable. The opportunity to connect with our nation’s audience on a daily basis… icing on the cake! Very happy.”

“These are powerful and accomplished women from different walks of life who have had amazing personal and professional experiences,” said executive producer Bill Wolff of the new panel. “This mix of smart, vibrant and energetic women is unlike anything else on daytime television.”

The ABC talk show has found itself in a state of upheaval in recent months. In addition to the departures of Geddie, Shepherd and McCarthy – the latter of whom only joined the show last year — longtime “View” host Barbara Walters retired earlier this year, creating yet another vacant chair to fill.

Compared to last season, “The View” was down 4 percent in women 18-49, averaging 530,000 viewers in the demographic. I was down 1 percent in total viewers to 3.121 million. More worrisome than “The View’s” ratings, though, is the fact that in July “The Talk” beat out its ABC rival in the key demos for the first time ever.