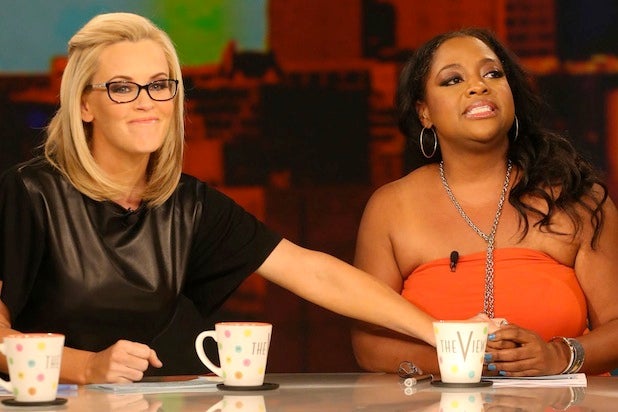 On Thursday, “View” watchers may have realized that Goldberg was absent from the season’s last taped episode. She was on the inactive New York City set of “The Chew” with returning co-host Rosie O’Donnell for the chemistry tests.

At least nine candidates have been identified in multiple reports. All of the women’s backgrounds/careers lie heavily in politics or sports.

Several hail from MSNBC, where executive producer Bill Wolff will be departing in order to replace “The View’s” longtime producer Bill Geddie on the upcoming season of the ABC daytime talker.

The nine women appearing in Broadcasting and Cable and other reports include:

– Lauren Sanchez, co-host on KTTV Fox-11’s “Good Day LA” and “Ten o’clock News.” Previously lost a spot on “The View” in 1999 to Lisa Ling. Recently appeared as a guest-host on the show.

– October Gonzalez, married to former NFL player Tony Gonzalez. He’s currently a studio analyst for “The NFL Today.” Although October doesn’t have any entertainment experience — she was working at a bar owned by Dennis Rodman in Newport Beach when Tony met her — TheWrap has learned that she’s now represented by her husband’s manager.

– Republican adviser Ana Navarro, has appeared on “Meet the Press,” “Real Time With Bill Maher,” and guest co-hosted “The View.”

– Conservative political commentator S.E. Cupp, a three-time guest co-host on “The View”, she has made several appearances on “Crossfire,” “Real Time With Bill Maher,” and “Hannity.”

– ESPN and ABC’s Sage Steele, hosts Friday and Sunday evening broadcasts of NBA Countdown. She has co-hosted several times on ABC’s “The View” this year.

– ESPN’s Jemele Hill, co-host of “Numbers Never Lie.” She has also appeared on “Mike & Mike,” “Rome Is Burning,” among others.

In addition to the above candidates, several people have “auditioned” for the show as live guest co-hosts, including Alicia Menendez, Host of Fusion’s “AM Tonight”; WGN’s Ana Belaval; ABC News’ Sara Haines and Pivot’s Megan McCain.

ABC declined to comment for this article. TheWrap has reached out to representatives for the above named candidates who didn’t immediately respond to our requests for comment.