The rock band Rush has always been a bigger hit with fans than with critics, so it makes sense that “Rush: Beyond the Lighted Stage,” a documentary about the Canadian trio, was named winner of the Tribeca Film Festival’s Heineken Audience Award on Saturday night.

The award goes to the film that scores highest in voting by audience members at all Tribeca screenings.

Directors Scot McFadyen and Sam Dunn received the award’s cash prize of $25,000 at a ceremony at the Altman Building in New York City.

In the press release announcing the award, Tribeca’s executive director, Nancy Schafer, commented, “Scot and Sam have told a great story with their film, which is insightful and entertaining to audiences whether or not they are part of the band’s formidable fan base.” 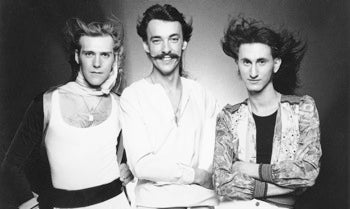 On the other hand, early critical reaction to the documentary suggests that it plays best to Rush devotees: Jeff Wells of Hollywood Elsewhere, not a fan of the band, called the movie “a fairly dishonest film in that McFadyen and Dunn, friends of this long-running Canadian rock band, make an effort to persuaded uninitiated viewers that Rush is a respected, generally admired group that makes reasonably engaging music.”

Katey Rich at Cinemablend, on the other hand, concluded a positive review by writing, “If your Rush-loving friend drags you to see it, stick around– you might get beyond Geddy Lee’s screechy vocals and find something to love too.”

In a way, “Rush: Beyond the Lighted Stage” could be considered the second recent documentary to take up the cause of a long-running, critically-maligned Canadian hard rock band, though Rush has enjoyed enormous success when compared to the sad-sack history of Anvil that was revealed in Sacha Gervais’ award-winning “Anvil! The Story of Anvil.”

Last year’s winner of the Heineken Audience Award at Tribeca was “City Island,” director Raymond De Felitta’s comedy starring Andy Garcia and Julianna Marguiles. The film, currently in limited release, has shown surprising staying power at the boxoffice, and is currently in its seventh week in theaters.

Past films that won the audience award include “War Child,” “Street Fight” and “Every Mother’s Son.”

“Rush: Beyond the Lighted Stage” is scheduled to air on VH1 and VH1 Classic on June 26.