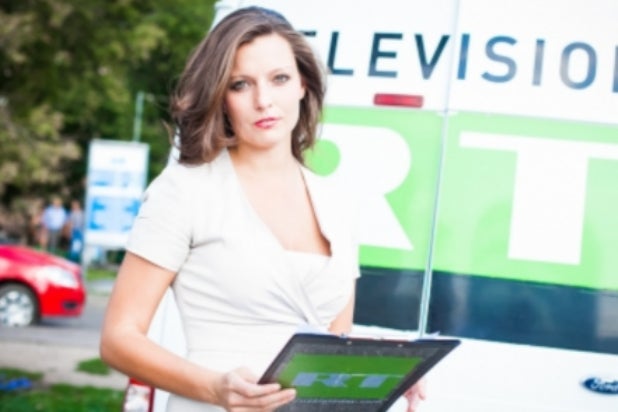 London-based Russia Today reporter Sara Firth has resigned in protest of her station’s coverage of the Malaysia Airlines flight crash coverage on Thursday.

Firth, a five-year employee, described the coverage as “the straw that broke the camel’s back for me,” handing in her resignation Friday morning.

Russia Today has been criticized for suggesting the crash is the fault of Ukraine. Many other media outlets have suggested that a more likely explanation is that pro-Russian separatists were responsible for shooting down the passenger jet, killing 298 people.

“Yesterday when the story broke you get the kick in your stomach when you’re going to get the facts and it’s this huge story,” Firth told U.K. publication Press Gazette. “And I walked into the newsroom and they were running an eye-witness account of God-knows who the person was blaming the Ukrainian government, and it is such a volatile situation.”

“It’s the level of disrespect for the facts that really bugs me,” she continued. “And so I made my decision yesterday when we started covering the story and this morning woke up and I just knew that I can’t go back in any more.”

Firth added: “The thing is once I made the decision, you have to be honest with yourself and it’s so difficult … Once you start telling the truth it’s brutal.”

Firth told the Gazette that the first rule of Russia Today’s style guide is to blame Ukraine — or anything else — rather than Russia: “It’s scary that it’s genuine RT guidance on how to do a story, and you have to believe it to succeed there. You stop believing that what they say is the way it is and you stop being useful to them …”

Then she got right down to it, concluding: “It’s not a nice organization either.”

A Russia Today spokesperson said: “We were not surprised by Sara Firth’s decision to leave RT after 5 years as a Moscow and London correspondent, as she has recently informed us that she was likely to take an offer from another firm.”

“Sara has declared that she chooses the truth; apparently we have different definitions of truth. We believe that truth is what our reporters see on the ground, with their own eyes, and not what’s printed in the morning London newspaper. In our coverage, RT, unlike the rest of the media, did not draw conclusions before the official investigation has even begun. We show all sides of the story, even if everyone else has already decided which side is to blame.”