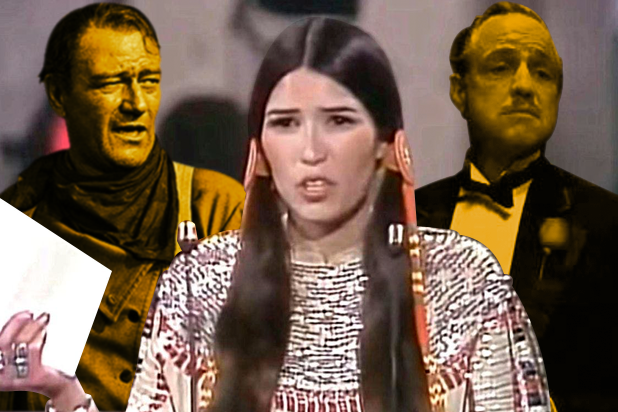 Sacheen Littlefeather endured boos, mockery and lies when she took the stage at the 1973 Academy Awards to reject an Oscar on behalf of Best Actor winner Marlon Brando — and to call for better treatment of Native Americans. Now is the perfect time for Hollywood to finally do her story justice, as we discuss in our latest “Shoot This Now” podcast. You can listen on Spotify or right here.

On every episode of “Shoot This Now,” we talk about remarkable true stories that deserve to be made into movies. It would be poetic justice for Littlefeather’s Hollywood protest to finally be the subject of a Hollywood film.

It is the story of a woman finding her voice, while caught between two of Hollywood’s most powerful men. Marlon Brando wanted to give her a global platform to speak out. But Littlefeather said John Wayne, famous for killing Native Americans on film, was so angry at her remarks that he wanted to drag her away.

“He had to be restrained by six security men,” she once told the Globe and Mail.

The government had ordered a media blackout, and the activists feared what the federal agents might do to them if the world wasn’t watching.

Brando and Littlefeather had first crossed paths years before the Oscars ceremony, on Alcatraz, when Native American activist seized the island to call attention to broken treaties.

But Brando and Littlefeather apparently didn’t meet there: The Globe and Mail said they first made contact when she wrote him a letter asking if he was truly interested in Native American peoples’ rights. They finally met in person in Washington, D.C.

Littlefeather has said that Brando waited until the day before the ceremony to ask her to decline his Oscar in front of the audience of 85 million people.

She didn’t have an evening dress, so she wore a traditional one made of buckskin.

At the March 27, 1973, ceremony, Littlefeather took to the stage when Brando was announced as Best Actor. When Roger Moore offered her the Oscar, she held out her palm to refuse it.

She was interrupted by rude noises and boos.

“Excuse me,” she said, to applause that drowned out the boos, then continued her statement:

“– and on television in movie re-runs, and also with recent happenings at Wounded Knee.”

She wasn’t allowed to read a letter that Brando had written about atrocities committed against Native Americans — but the New York Times printed it after the ceremony. You can read it here.

She later told the Los Angeles Times that the Oscars speech helped end the media blackout at Wounded Knee.

But Littlefeather paid a price.

She was scrutinized for decades after the speech, and even falsely accused of being an imposter. Though she wanted to be an actress, she said the industry mostly shut her out. She went on to work in health and nutrition.

In March, a representative for Littlefeather said she was battling cancer.

If you don’t want to click on the episode above, you can also listen at any of the links below: