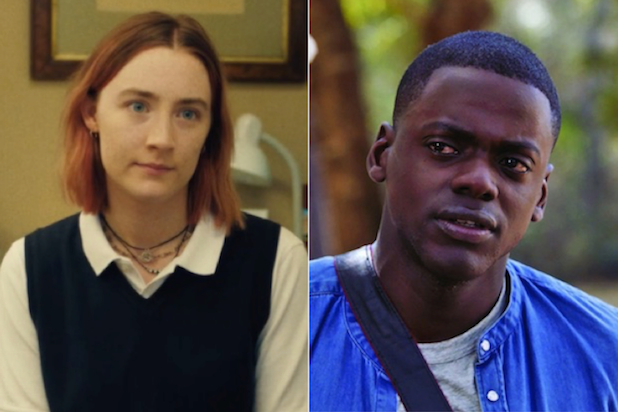 Daniel Kaluuya from “Get Out” is a legitimate Oscar contender. Tom Hanks, Meryl Streep and Daniel Day-Lewis are not as invincible as we think. And the Oscar winner for Best Picture will be “The Big Sick,” “Lady Bird,” “Get Out,” “Mudbound” or “Three Billboards Outside Ebbing, Missouri.”

Those are among the conclusions that you could reach based on Wednesday morning’s Screen Actors Guild Award nominations, which dealt a blow to a few presumed frontrunners and just might have put a handful of smaller films in the driver’s seat at the Oscars.

Remember, last year at this time lots of pundits (including this one) dismissed the warning sign that Oscar favorite “La La Land” had failed to secure a SAG nomination in the Outstanding Cast in a Motion Picture category. Even though no film had won Best Picture without a SAG ensemble nomination since “Braveheart” in 1995, we were sure that this would be the second exception in the category’s 22-year history.

But it wasn’t: “Moonlight,” which did have an ensemble nod, scored a big Oscar upset instead.

So if the SAG ensemble category is as reliable a precursor as the statistics suggest, that should make Greta Gerwig’s “Lady Bird,” Jordan Peele’s “Get Out” and Martin McDonagh’s “Three Billboards Outside Ebbing, Missouri” the three films most likely to win Best Picture, and it should put Steven Spielberg’s “The Post,” Guillermo del Toro’s “The Shape of Water” and Christopher Nolan’s “Dunkirk” in tough positions.

The two other SAG ensemble nominees, “The Big Sick” and “Mudbound,” are less likely to truly contend for the top Oscar – at least one of them is likely to wind up alongside “Captain Fantastic,” “Straight Outta Compton,” “The Butler” and “Bridesmaids” among the recent films that have received SAG ensemble nods, but missed out on Oscar Best Picture nominations. (Most years, there’s at least one of those.)

In the individual film categories, meanwhile, the 2,000-plus randomly chosen members of the SAG nominating committee bypassed some truly formidable names, with “The Post” stars Hanks and Streep and “Phantom Thread” star Day-Lewis failing to land the lead-actor nods that had seemed all but inevitable. (Nom-com members did receive the all-important screeners to both of those films, though their late arrival on the scene no doubt hurt.)

The SAG snub is unlikely to be repeated at the Oscars, though Hanks was bypassed by both SAG and then the Oscars in 2013 when he was a presumed lock for “Saving Mr. Banks.” So he probably has more to worry about than Streep, who has more SAG film nominations than anybody else, or Day-Lewis, who holds the record for the most Best Actor Oscar wins.

The lead actor and actress nominations gave a significant boost to Kaluuya (“Get Out”), James Franco (“The Disaster Artist”), Denzel Washington (“Roman J. Israel, Esq.”) and Judi Dench (“Victoria & Abdul”), all of whom now enter the Oscar race with noms from both SAG and the Golden Globes.

They were less kind to Jake Gyllenhaal and Jessica Chastain, who could have used a SAG boost to their candidacies for “Stronger” and “Molly’s Game,” respectively.

In the supporting categories, the big surprises were two comic performances, Hong Chau in “Downsizing” and Steve Carell in “Battle of the Sexes,” whose nominations came at the expense of Octavia Spencer in “The Shape of Water,” Melissa Leo in “Novitiate,” Ben Mendelsohn in “Darkest Hour” and particularly Armie Hammer and Michael Stuhlbarg in “Call Me by Your Name.”

SAG voters had seemed likely to choose at least one of the actors from that rapturous, critically acclaimed coming-of-age story – but instead, they opted to honor only the film’s lead, Timothee Chalamet, and to give supporting nods to a pair of “Three Billboards” stars, Sam Rockwell and Woody Harrelson.

Mind you, this doesn’t deal a death blow to anybody’s chances. While slightly more than 75 percent of SAG acting nominees in the movie categories typically go on to receive Oscar nominations, it’s rare for an Oscar acting category to match up completely with the equivalent SAG category. A five-for-five match has only happened 11 times in the last 10 years in the four acting categories, and only four perfect matches have happened in the last five years.

The odds are that every SAG Award category contains one actor or actress who will not repeat when Oscar nominations are announced on January 23.

That ensemble category, though, has to come as disquieting news for “The Post,” “The Shape of Water” and “Dunkirk.” Yes, you can win Best Picture without a SAG ensemble nomination – but as “La La Land” learned last year, it’s a lot harder than it looks.