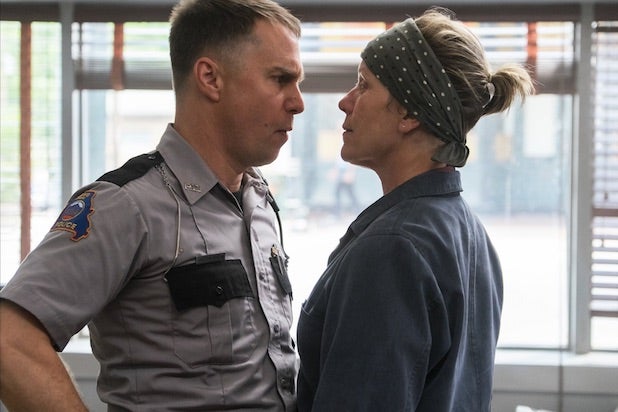 After a weekend that brought the first two major guild awards of the 2017-2018 awards season, big prizes have gone to “Three Billboards Outside Ebbing, Missouri,” “The Shape of Water,” Frances McDormand, Gary Oldman, Allison Janney and Sam Rockwell.

But does it mean anything? Oscar nominations won’t be announced until Tuesday, and it’s hard to get a real read on the season until those have come in.

McDormand, Oldman, Janney and Rockwell are clear frontrunners in the Oscar acting races.

And here’s what we didn’t learn:

That’s because if you’re looking for clues as to what might win Oscars, the Producers Guild Awards have faltered in the last two years, while the SAG Awards are far more valuable as an indicator in the individual categories than in the ensemble category.

In the SAG Awards’ 23-year history, individual winners have gone on to take home Academy Awards more than two-thirds of the time. But winners in the Outstanding Performance by a Cast in a Motion Picture category have won the Oscar for Best Picture less than half the time.

That means that McDormand, Oldman, Janney and Rockwell only boosted their position as favorites in their categories. Meanwhile, “Three Billboards Outside Ebbing, Missouri” got a nice award that won’t make it much likelier to win Best Picture, where it may be too divisive to prevail in a category that includes several other strong contenders, including “Lady Bird” and Producers Guild winner “The Shape of Water.”

The honor was significant for Janney, who originally appeared to be in a tight race with Laurie Metcalf from “Lady Bird.” Since the Golden Globes, though, Janney has won a series of awards for her performance in “I, Tonya,” dispelling any doubts that her combative mother character may be too harsh and unlikable to win. (Metcalf’s combative mom has a few sympathetic notes, but Janney’s is defiantly awful from start to finish.)

Rockwell’s win was similar, because his brutish and dimwitted police officer in “Three Billboards” has become a flashpoint for criticism of the film. But he has managed to win the same string of awards over Willem Dafoe, who was once the presumed frontrunner for his understated performance in “The Florida Project.”

The two lead awards merely reinforced that McDormand and Oldman are on the road to Oscar. McDormand is in a fiercely competitive category that also includes remarkable performances from Saoirse Ronan in “Lady Bird” and Sally Hawkins in “The Shape of Water,” but the “Three Billboards” actress is such a force of nature that it’s hard to imagine her losing after scoring another win at SAG.

Then again, McDormand did conclude her acceptance speech by saying, “There’s a lot of young ones coming up, and they need doorstops, too,” which could conceivably give a little momentum to the 23-year old Ronan or the 27-year-old Margot Robbie, though it will more likely just make voters love McDormand more for being gracious.

One warning, though: In the last 10 years, all four SAG winners have gone on to win Oscars only four times; more often, the Academy will choose three SAG winners and find their own champ in the fourth category. But there’s not an obvious spot for a SAG/Oscar split.

The results came less than 24 hours after the Producers Guild of America selected “The Shape of Water” as the year’s best-produced film, which meant that no film can achieve a sweep of the four major guilds, SAG and the Producers, Writers and Directors Guilds. (The sweep became impossible the moment “Shape of Water” won PGA, because it wasn’t nominated for SAG ensemble.)

The Directors Guild is next up, on Feb. 4, followed by the Writers Guild a week later. By then, will we have a clearer picture of the Best Picture race?

Don’t count on it.

Oscars 2018: We Predict Nominations in All 24 Categories (Photos)