Native American actor Saginaw Grant, who was best known recently for his role in “Breaking Bad,” died in his sleep of natural causes in a private care facility in Hollywood on Wednesday. He was 85.

“He loved both Oklahoma and L.A.,” Carmichael said. “He made his home here as an actor, but he never forgot his roots in Oklahoma. He remained a fan of the Sooner Nation,” Lani Carmichael, Grant’s publicist, said in a statement.

Grant, who began his acting in the 1980, was known for films including “The World’s Fastest Indian” with Anthony Hopkins and as Chief Big Bear in the “The Lone Ranger” starring Johnny Depp. He also appeared in several TV series, “Veep,” “Community,” “Breaking Bad” and “Shameless” among them. 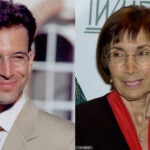 Born in Pawnee, Oklahoma, in 1936, Grant was a US Marine Corps veteran and remained active in the veterans community. As the hereditary chief of the Sac & Fox Nation of Oklahoma, he also participated in the National Gathering of American Indian Veterans over the years.

Outside of acting for the last three decades, Grant is also an award-winning musician and Pow Wow dancer who has been honored with a Living Legend Award by the Native American Music Awards, with his 2018 album “Don’t Let the Drums Go Silent” winning the Record of the Year from NAMA.

There will be a memorial for Grant in Los Angeles, with more details to come, Carmichael said.