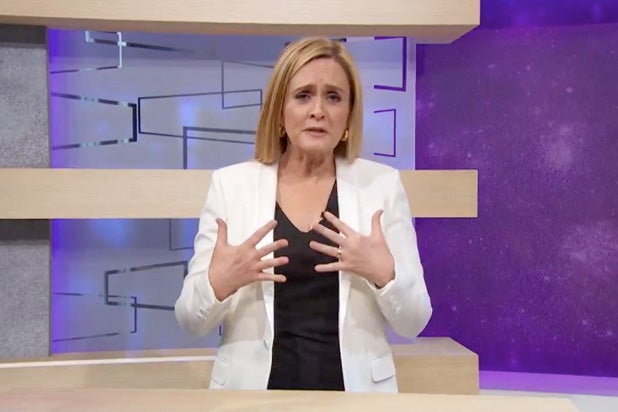 A version of this story about Samantha Bee appeared in the Down to the Wire issue of TheWrap’s Emmy magazine.

Samantha Bee’s “Full Frontal” is back in the Emmy race for the third straight year — despite the blowback from her description of first daughter and White House adviser Ivanka Trump as “a feckless c—.”

The “Daily Show” alum talked to TheWrap about her momentous, headline-grabbing year — and the challenges of preparing topical comedy in the era of President Donald Trump.

And you have to be constantly ready to adjust “Full Frontal.”
That’s true for every show of this kind. It takes a herculean effort to be nimble, because everything happens so fast.

As a political comedian, what are the advantages and disadvantages of having Donald Trump as president?
I don’t think any of us think it’s tremendously delicious. Certainly, there’s no shortage of material, but we also are citizens of this country and we want things to go smoothly. I think all of us would make a choice to have a more boring leader, and have to struggle a little bit more to be topical, than to have utter chaos at the highest levels of government.

This is the hand we’ve been dealt. We all have ulcers and patches of hair falling out. And Donald Trump doesn’t bless us with comedy. [pause] But Donald Trump Jr. does. So there’s always a silver lining.

“Full Frontal” began at a time when Trump has already declared his candidacy, so the show has never known a political landscape without him. But did his nomination or his election substantially change what you did?
His nomination didn’t necessarily change anything for us, but when he won the election it changed. It didn’t change the process at all, but the world felt different.

I think with the outcome that we had all expected, we definitely thought that we would have the ability to tell a more diverse range of stories. We thought the Hillary Clinton administration would be totally imperfect — but we could have a reasonable chance of predictability, and you’d find the occasional week where you couldn’t do anything particularly topical and it would be a little more challenging.

Obviously no administration is perfect, so we knew there would be material. But the election changed a lot of people’s day-to-day lives. There’s too much to talk about now. I think this is true across all shows like this. It’s a dilemma.

A recent show included a video from Dana Loesch, the NRA spokesperson, where she talked about “the late-night hosts who think their opinions are the only opinions that matter.” It does feel as if late-night is a center of the resistance to this administration in certain ways.
I don’t think any of us think that our opinions are the only ones that matter. We just have TV shows. And it’s not like we all communicate with each other on a daily basis and commiserate over it. It just happens that we are topical shows, and we’re not news shows, so this is the material we have to work with.

You can’t ignore what’s topical these days. It all feels very high stakes. It’s hard to shy away from the real world.

You recently took a lot of flak, and lost some advertisers at least temporarily, over your “feckless c—” comment about Ivanka Trump, in particular the word that you used.
I wish that people had been able to see the content that led up to it, actually. I was speaking very passionately about an idea I felt very deeply about that was getting no coverage. My main regret was diverting attention from the topic I was discussing. Not that we could have caused everyone to turn their eyes to the story.

Of course, news outlets had the option to turn away from the story of a word that I said and turn their focus to the migrant children.

Do you take criticism in general as a sign that what you’re doing is working?
Normally, if the NRA TV takes a stand against me, I know that I’m taking a correct stance. That’s a pretty good barometer of where my point of view should be. If Fox News hates what I’m doing, it’s nice to know that they strongly disagree.