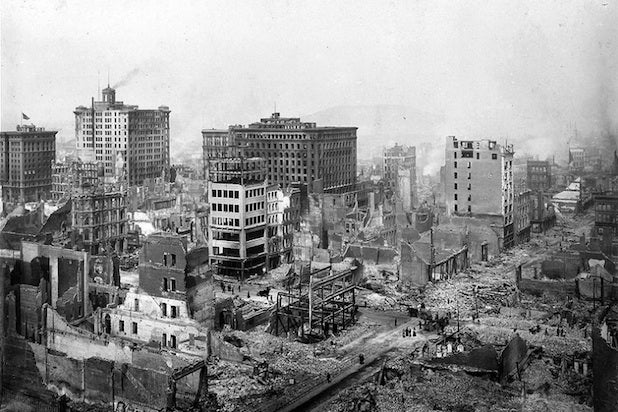 TNT is looking to shake things up with a development order for “1906,” a proposed four-hour event series about the San Francisco earthquake that took place in that year, multiple individuals have told TheWrap.

A co-production from Landscape Entertainment and eOne, “1906” will be executive produced by Bob Cooper (“Amistad,” “John Tucker Must Die”) and Tyler Mitchell (“The Incredible Burt Wonderstone,” “My Own Worst Enemy”). Landscape’s director of development Sandy Shenkman is overseeing the project.

Jim Solomon (“The Conspirator,” “The Bronx is Burning”) is in talks to write the project.

The series is described as “an account of San Francisco before during and after the 1906 Earthquake and fires and the incredible graft and corruption that it exposed. Mother nature caused the earthquake, but human nature caused the disaster. Only 10 percent of the damage happened because of the earthquake. The remaining 90 percent was a result of corruption, political graft, greed, and incompetence.”

Approaching its 110th anniversary in a couple of years, the 1906 San Francisco earthquake and fires killed more than 3,000 people and destroyed more than 80 percent of the city. It’s still the greatest loss of life from a natural disaster ever in California’s history.

Note: An earlier version of this article mistakenly reported that TNT had ordered “1906” to series. In fact, the project is in development at the cable channel. TheWrap regrets the error.