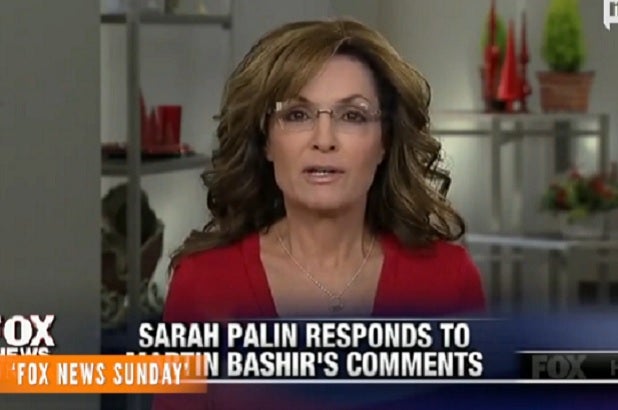 Sarah Palin on Sunday accepted MSNBC host Martin Bashir’s apology for some nasty remarks he made about her last week after she compared the national debt to slavery, but she didn’t back down.

“The definition of slavery is to be beholden to a master, and we will be beholden when that note is due,” the former governor of Alaska and Republican vice-presidential candidate said during an appearance on “Fox News Sunday.”

Bashir, in response to Palin’s initial comments, called her a “world class idiot.” He described a punishment that forced a slave to put “sh-t in his mouth” and said Palin would make an “outstanding candidate” for the same treatment.

Bashir apologized soon after, and said his comments were “wholly unacceptable,” and Palin accepted Sunday.

“Who am I to not accept an apology?” Palin said. “Everyone must humble themselves and accept that offer of apology. But next time they want to say such a thing and then get the attention they were seeking after they said it, and then they want to call and apologize to me in private? I’d like them to go through Todd first or one of my children first. Leave a message with them. Hear what they have to say about it. And then they can come to me.”

Also read: Matt Lauer and Sarah Palin Get Into Heated Exchange Over Obamacare

She also said she could handle Bashir’s comments, noting that she has a prominent platform to defend herself.

“Are you going to become bitter or better?” she said. “I don’t have to accept his words, his vile, evil comments, so they don’t have to affect me. I move on and I charge forth.”

Palin canceled an interview with NBC’s “Today Show” on Wednesday, just two days after Bashir apologized. “Today” host Matt Lauer was scheduled to visit Palin’s home in Wasilla, Alaska, for a Christmas-themed interview promoting her new book about the holiday.

The treasurer of Palin’s political action committee, Tim Crawford, had earlier sent a letter to NBC News President Deborah Turness and MSNBC President Phil Griffin questioning why no disciplinary action had been taken against Bashir, when fellow MSNBC host Alec Baldwin had been suspended days earlier for inflammatory remarks that, unlike Bashir’s, were not made on the network.

Crawford wrote, “Are we to assume then, that disciplinary procedures at your network take place based on the target of the remarks rather than the remarks themselves?”

“Americans deserve to know that your network doesn’t condone violent and hateful rhetoric directed at anyone, regardless of gender, sexual orientation, or political persuasion.”

Bashir issued an apology on his MSNBC show Monday, saying his words were “wholly unacceptable,” “neither accurate nor fair,” and “brought shame upon [his] friends and colleagues at this network, none of whom were responsible for the things that I said.”