Former Alaska Governor Sarah Palin said Sunday that she will never be forced to get a COVID-19 vaccine.

“It’ll be over my dead body that I’ll have to get a shot,” she said at a Turning Point USA event in Arizona.

As the crowd cheered, she added, “I will not do it. I won’t do it and they better not touch my kids, either.”

The one-time vice presidential candidate has been vocal about her unvaccinated status. In September, she appeared on Fox News and declared that while she believes in science, she had no plans to be inoculated against the virus that has gripped the nation in a pandemic for over a year and a half. 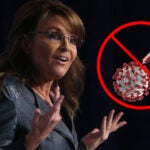 Also Read:
Sarah Palin Hazed for Not Getting COVID Vaccination: ‘I Bet She Is Horse Dewormed’

She has pointed to her previous COVID infection when defending her choice, saying she believes she has increased immunity as a result of her prior illness.

Palin said at the time she wanted “to ask the questions” about the vaccine and referred to top infectious disease expert Dr. Anthony Fauci when she discussed immunity. Fauci has encouraged previously infected people to get the vaccine, which, the CDC notes, has been shown to reduce the likelihood of previously infected people contracting COVID-19 again.

Though she encouraged mask-wearing in March, when she was first diagnosed, Palin used part of her speech Sunday to tell the assembled crowd that there is strength in numbers and it was incumbent on listeners to fight against vaccine mandates.

“Realize that those around you, as you stiffen your spine, their spines, too, will stiffen, and there is an empowerment in a group like this where you all can feed off each other and really be strong,” she said.