Former Alaska Gov. Sarah Palin confirmed Thursday night that she is unvaccinated against COVID-19, but insisted she believes in science.

“I believe in the science and I have not taken the shot,” the former vice presidential candidate and reality television star told Fox News’ Greg Gutfeld on his late-night program. 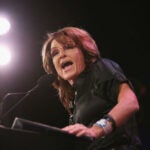 She said she’d already had the virus and shared her belief that she had increased immunity as a result. Dr. Drew Pinsky, also a guest on “Gutfeld!” Thursday night, interjected to share more information about a recent Israeli study that showed previously infected people are less likely to contract the Delta variant.

Watch it at Mediaite.