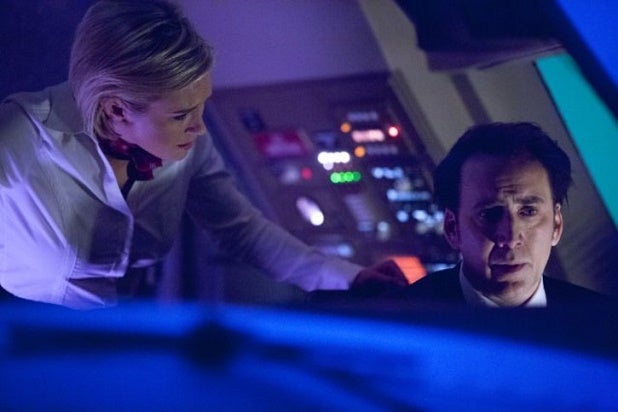 “Please do not bring unbelievers to this movie,” the Anti-Christ is quoted as saying on the Facebook page for “Left Behind,” the Nicolas Cage thriller about the Biblical Rapture that opens nationwide Friday.

It’s hard to say at this point, but it appears Satan is going to get his wish.

“Left Behind,” a remake of the 2001 film starring Kirk Cameron, is expected to draw a mainly Christian crowd this weekend when it rolls out in 1,785 theaters. An opening in the $10 million range would be heavenly, according to Mark Borde, distribution chief at Freestyle Releasing.

“This is a tough weekend,” he said, referencing the two other wide openers, the David Fincher-Ben Affleck thriller “Gone Girl” and the demon doll horror movie “Annabelle,” which are expected to dominate.

“That said, this film targets a faith-based audience, it’s based on a book series that has sold more than 60 million copies, it’s a story that’s very familiar to many people and it has a real star, so we’re cautiously optimistic.”

It’s been an up-and-down year for religious-themed movies. Mark Burnett’s “Son of God,” the low-budget indie “God’s Not Dead” and the Greg Kinnear drama “Heaven Is for Real” all scored in the spring. But there have been several misfires since, including “Identical,” another Freestyle release that tanked last month.

Cloud Ten Pictures is behind the $15 million “Left Behind,” which stars Cage as a pilot searching for his daughter as the world ends. It carries a PG-13 rating – unusual for a Christian movie – because of some very intense scenes. Paul Lalonde wrote and produced the thriller, which is directed by Vic Armstrong and co-stars Lea Thompson and Chad Michael Murray.

“Left Behind” will draw most of its audience from it grassroots campaign that has targeted Christian groups and faith-based influencers. There aren’t any reviews yet but it has a massive Facebook presence, with nearly 1.3 million followers, or nearly double the count for “Heaven Is for Real.”

Borde said the promotional campaign did have a secular component as well, intended to capitalize the fact that it’s a legitimate thriller and the presence of Cage. Banking on the latter could be a leap of faith. The actor’s last three movies, 2010’s “The Sorcerer’s Apprentice,” 2011’s “Season of the Witch” and 2012’s “Ghost Rider: Spirit of Vengeance.” have all underwhelmed. Cage did voice work for the last year animated hit “The Croods.”

“We think we’ll get a few non-believers,” Borde said.