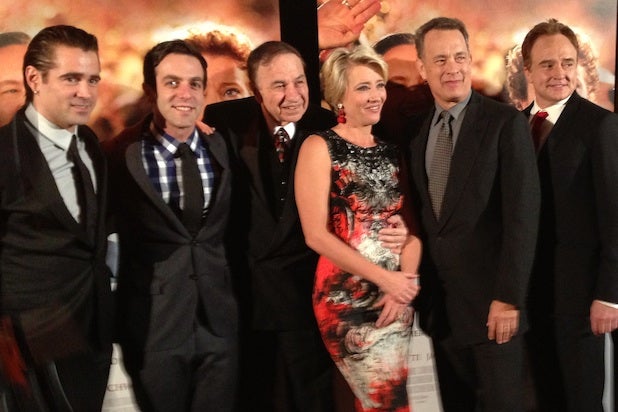 “Saving Mr. Banks” came to the same theater on Thursday night where “Mary Poppins” premiered almost 50 years ago – and apart from Disney’s inability to track down exactly where Walt Disney and P.L. Travers were sitting on that night in 1964, the company had to figure this night was downright supercalifragilistic … Well, you know the rest.

A thoroughly crowd-pleasing film about the battles between Disney and the stubborn author Travers over the film version of her beloved children’s book, “Saving Mr. Banks” opened this year’s AFI Fest by staging its North American premiere at the TCL Chinese, which is far better known under the name it sported back when “Mary Poppins” premiered there in the summer of 1964, Grauman’s Chinese.

Disney had hoped to figure out where Travers and Disney were sitting at the ’64 premiere, so they could put stars Emma Thompson and Tom Hanks, who play the pair, in the same seats – but their research came up short, and anyway the Chinese seating chart has changed because of a recent IMAX makeover that reconfigured the huge theater with stadium seating.

A couple of hours before the premiere, Thompson, who plays Travers, partook in an old Chinese tradition, putting her hands and feet in wet cement in the forecourt of the theater. “It was unexpectedly quite moving,” she told TheWrap at a reception between the handprint ceremony and the premiere. “I didn’t think I was going to feel that way about it.”

As for “Saving Mr. Banks,” the AFI audience appeared to feel the way the studio expected, and the way reports out of the London Film Festival suggested they would – which is to say, they loved it.

An unabashedly tear-jerking and proudly emotional look at how suffering can inform art, director John Lee Hancock’s film wears its heart on its sleeve and doesn’t apologize for being manipulative. And while that will definitely rub some cynics the wrong way, it’s also hard to resist for those of us for whom a few bars of “Feed the Birds” or the lines “Winds from the East/Mist coming in” are, to borrow Thompson’s phrase, unexpectedly quite moving.

TheWrap’s Alonso Duralde called the film “whimsical, moving and occasionally insightful,” and concluded, “‘Saving Mr. Banks’ reminds us of why we watch movies, yes, but it also provides insight into why people make them.”

Sure, parts of the narrative seem awfully far-fetched: Was Mrs. Travers, who was by some reports even grumpier and more unpleasant in real life than Thompson makes her onscreen, really won over so completely and immediately by the song “Let’s Go Fly a Kite?”

(After all, we’ve already seen her rejecting songs like “A Spoonful of Sugar” and “Supercalifragilisticexpealodocious.”)

But Richard Sherman, one of the songwriting Sherman brothers whose battles with Travers are detailed in the film, was on hand at the reception to say that the film was surprisingly accurate. “They really got it right,” said Sherman, who served as a consultant on the film and is played by Jason Schwartzman.

To its credit, the film also allows that Travers might not have been wrong to disdain the relentlessly cheery Disney façade, or the fact that Walt showed up at Disneyland with a pocket full of pre-signed autographs so that he could bestow his tokens on adoring patrons without having to actually stop and spend time with them.

Hancock touched on this in his introductory remarks, when he thanked the Disney executives and said, “Even though I doubted you every step of the way, that you were going to come in and make me change things, you never did.”

As to the inevitable question that arises this time of year – yes, “Saving Mr. Banks” is a clear Oscar contender, a likely Best Picture nominee and an all-but-certain path to the Dolby Theatre for actress Thompson and supporting actor Hanks (who’ll no doubt also have his ticket punched in the Best Actor category for “Captain Phillips”).

It doesn’t have much shot at the 13-nomination haul of “Mary Poppins,” Disney’s most-nominated movie ever, but nobody’s expecting that.

The big question: Can it challenge “12 Years a Slave” and “Gravity” for the win? That might be a stretch, but recent history (“The Artist,” “Argo”) suggests that it’s not wise to underestimate Oscar voters’ appetite for sentiment and for films about Hollywood … not to mention sentimental films about Hollywood.