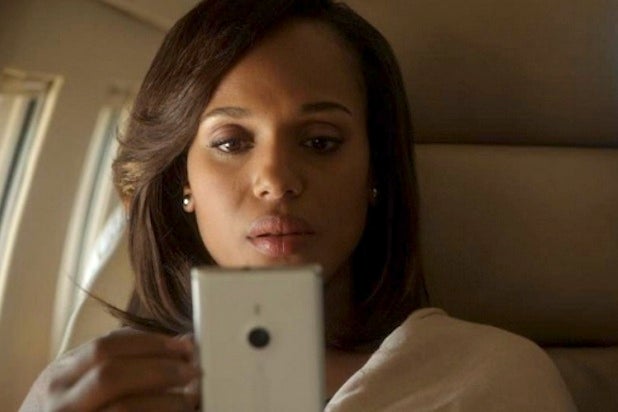 Shonda Rhimes didn’t sweep the firing of Columbus Short under the rug on Thursday’s Season 4 premiere of ABC’s “Scandal.” Instead, the executive producer used the his absence to rebuild the show after tearing it down in last season’s finale.

At the top of the episode, Olivia Pope (Kerry Washington) was living the high life on a faraway island with what looked like lots of lovin’ from Scott Foley’s Jake, sun, food and the best red wine. But then, an anonymously sent letter arrived with her food delivery that informed her that Harrison (Short) was dead.

Let’s go back to last season’s finale to refresh ourselves on what happened to Harrison. After helping Olivia’s dad Rowan (Joe Morton) capture her mother Maya (Khandi Alexander), Harrison realized that the mastermind behind all the recent destruction around him was actually Rowan. After confronting Rowan, Harrison found himself on the wrong side of a pistol. Did Rowan have him killed? We don’t see that, nor do we hear a gunshot.

Fast-forward, Olivia has ironed the curls out of her hair and rushed back to DC. First order of business was to check in with the troops. When she arrived to the OPA offices, she found only Quinn (Katie Lowes) had stuck around. And she was the one that tracked Olivia to the island to inform her of Harrison’s passing. Meanwhile, Huck (Guillermo Diaz) had re-invented himself as Randy the tech help guy and Abby (Darby Stanchfield) had become President Grant’s (Tony Goldwyn) press secretary. Neither of them were happy with Olivia, especially if she couldn’t promise to stick around after handling Harrison’s funeral.

Next stop: Dad. Olivia straight up asked her father if he was behind Harrison’s death. He denied having any part of it. Of course, he’s probably lying. If not, then he was one of the last people to see Harrison alive.

With everything gone to crap, Olivia was totally OK with returning to island life with Jake. Then, a call for help. A male senator tried to rape a female senator before she pushed him down the stairs. He was injured, but not dead. She needed Olivia’s help to get her through this mess. And, of course, Liv can’t pass up a case, especially one in which a woman was defending herself from an attack.

The case would bring her back into the center of D.C. as word of her return had reached the president. Always a pretty soft Republican — often I wondered if Grant was just in the party for the sake of his father — President Grant already had enough problems. After supporting an equal pay bill, he fell out of favor with his party. Plus, the media had gotten wind of his intention to appoint a Democrat as his new attorney general. The reports were true. David Rosen (Joshua Malina) would later accept the appointment.

As a result of the death of his son — again by Rowan’s orders — Grant had become a lone wolf. But, that paled in comparison to grieving mother Mellie (Bellamy Young) who had clearly suffered a breakdown after losing her son.

But as one death would place a wedge in their relationship, Harrison’s would bring together the gladiators. At his funeral, the four former co-workers stood close to each other as his body descended into the ground — Abby and Olivia even held hands. It was fleeting, though, as they separated without saying a word to each other.

Now, all that stood between Olivia and her island home was the resolution of the sexually-assaulted senator. After hearing the woman recount the night for her attorney, Olivia became convinced the senator was lying, It would all come together as the lone gladiator Quinn discovered that the female senator wasn’t the male senator’s type. He liked brunettes.

Olivia then figured it all out. The senator sent her brunette assistant to the opposing senator’s home because she knew that he would make a move on her. The assistant, unaware of her boss’ plan, pushed the senator off the staircase.

With the case taking that turn, Olivia was reminded of the depravity of D.C. But, then she remembered something Harrison liked to say, “Are we gladiators or are we bitches?” And that’s how OPA re-opened its doors and started a new era for “Scandal.”