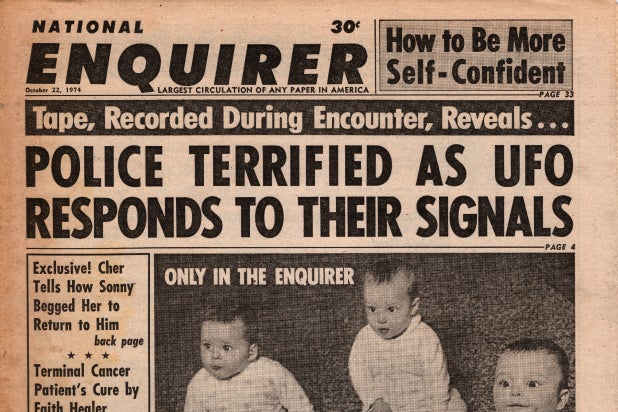 Say what you will about “Scandalous: The True Story of the National Enquirer,” but there’s no denying that Mark Landsman’s biting documentary is right on cue.

Just this week, NBC posted a story about how the presidential impeachment hearings — a monumental event in the history of American politics — “lacked the pizazz necessary to capture public attention.” Everyone who saw that piece probably wondered what the heck has become of American journalism, and “Scandalous” has the answer: It got tabloided. It got tabloided big time.

Landsman’s documentary is a multifaceted trek through the last half-century, tracing the history of the notorious periodical — famous for celebrity scandals, UFO sightings and political intrigue — from a sporting publication to a best-selling mainstay at supermarkets everywhere. That would have been enough to make a fast-paced and exciting documentary, all by itself. The formulation of The National Enquirer was directly linked to the mafia and swiftly increased circulation by publishing violent true-crime photography.

The Enquirer, Landsman’s film argues, was pure sensationalism. But it was also exactly what people wanted to read. No care was given to what was responsible to report; if the people wanted it, it must be worth publishing. And so the money flowed, and reporters were given expense accounts to travel the world in search of scoops. It was, by all the reports of the people involved, the salad days of the industry.

But “Scandalous” does not begin with fun and games and excess. It begins very solemnly, in an interview with respected journalist Carl Bernstein opining about the contrast between popular culture and journalism. It isn’t just a “bad time for the press,” he argues, but “a bad time for the truth.” And documentarian Landsman (“Thunder Soul”) isn’t merely cataloging the history of a kooky tabloid; he’s using the Enquirer as a launching pad to explore the collapse of the entire journalistic enterprise.

As the National Enquirer expanded in scope and influence, and even in journalistic ability — they were, by the admission of Pulitzer Prize-winning reporter Maggie Haberman, lapping the mainstream media in their investigative coverage of the O.J. Simpson case — the mainstream media responded in kind. Sensationalism became a necessary element of all news coverage in order to drive subscriptions and ratings, and repeatedly throughout the documentary we hear the rationalization that if it’s what the people want, it must be worth printing.

Of course, what people want is controversy, and violence, and the revelation that the rich and powerful are small and weak. And the rich and powerful don’t want that. It’s heart-wrenching to hear stories of Enquirer reporters explaining that they had horror stories that they couldn’t publish about Bill Cosby, because Cosby contacted the publisher and made a deal to provide exclusive interviews in exchange for the freedom to continue doing monstrous things, free from scrutiny. It’s hard to pretend it was all fun and games when decency was openly for sale.

And it’s no surprise to see that, as the publishing industry evolved and the Enquirer changed hands, Donald Trump became one of its key contributors. Reporters explain that Trump was one of their biggest tipsters, not just lauding his own newsworthiness but also planting stories about his rivals.

Even the most hardened Enquirer veterans, who freely admit to committing questionably ethical deeds (or worse) just to get a front-page story, were appalled to discover that the magazine had turned into a vehicle for political propaganda. Where at one point the Enquirer at least used to target everyone equally, it was now valuable only for its ubiquity at supermarkets and for its ability to draw everyone’s eyes to its headlines, whether or not they ever read the articles.

“Scandalous” is a fast-paced documentary, packed with incident and information, as tantalizing as an old issue of the Enquirer itself. It’s exquisitely ironic to see Enquirer-style tactics used against the Enquirer itself, with unearthed recordings and salacious exposés, delectable excess, and undeniable shame.

It’s easy to write the publication off as a trifle but when presented with all the pizazz the filmmakers can muster, and all the sober regret the interview subjects can find within themselves, Landsman’s documentary makes a reasonable case that the tabloid was everything we wanted, the last thing we needed, and probably a big part of the reason why the whole world seems to be constantly on fire. And, perhaps more importantly, it’s a reminder that we shoulder just as much blame for buying into the scandals as they did for publishing them.