MSNBC’s Joe Scarborough and Mika Brzezinski made a quick stop at CBS Thursday night to tell “Late Show” host Stephen Colbert how their jobs have been different since President Joe Biden took over for Donald Trump.

Brzezinski, holding a glass of pinot noir, was diplomatic and said she’s enjoyed not feeling like she needs to put on “a suit of armor” every morning, but Scarborough cut straight to the chase: “Biden hasn’t accused me of being a murderer.”

“But we’ve got three and a half years left,” he added. “It could happen.” 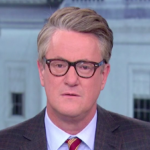 On a few different occasions throughout his single-term presidency, Trump used the untimely 2001 death of one of Scarborough’s former congressional aides, 28-year-old Lori Klausutis, to claim that, according to “some people,” Scarborough “got away with murder.” Eventually, Klausutis’ widower wrote to Twitter’s Jack Dorsey last spring, imploring him to delete Trump’s tweets baselessly tying Scarborough to her death.

Scarborough, too, was forced to speak out. Last May, he took time out of “Morning Joe” to memorialize her fully: “I didn’t know Lori well. She worked in an annex office in Okaloosa. I met her a couple of times at a couple of events but after she passed away, [her husband] T.J. told me that she was working in a bank — and I hope I have all these details right because it’s been several years since we talked about this — but she was working in a bank and she decided that she wanted — she was a lifelong Republican, faithful Catholic — she decided she wanted to work in something like you said, something bigger than herself,” he said of Klausutis, who had an undiagnosed heart condition. She died after hitting her head on her office desk.