We’ve just made it through Hollywood’s second-biggest party weekend of the year, trailing only Oscar weekend. Mikey Glazer has covered the mob scene that transpired after the show inside the Beverly Hilton, where Weinstein and NBC Universal and Summit and In Style and HBO threw parties and the fire marshals fretted, while Sharon Waxman dealt with the non-movie topic that was the talk of the night.

But those reports are only the tip of the iceberg. Even before Globes night, the weekend was studded with events, courtesy of Brits and Australians and indies and critics and studios.

I didn’t make it to every one of them, but here are a few glimpses from the eight parties and two awards shows I did manage to attend over the weekend: 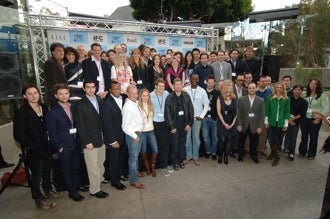 At the Independent Spirit Awards Nominees Brunch, Saturday morning at the BOA Steakhouse on Sunset Blvd., the assembled nominees took the stage in groups and approached a pair of microphones to give their names and the films on which they worked. Big applause went to the likes of “A Serious Man” actor Michael Stuhlbarg, “Food, Inc.” director Robert Kenner, “An Education” screenwriter Nick Hornby … and Sacha Gervasi, director of the documentary “Anvil! The Story of Anvil.”

Actor Joseph Gordon-Levitt gave one of the most succinct intros: “I’m Joe. I acted in ‘(500) Days of Summer.’” Later, Gordon-Levitt, very young and preppy looking in a v-neck sweater and tie, said he was enjoying his first awards-season experience since his teenage days on the TV series “Third Rock from the Sun.”

“This is actually more fun than I thought it would be,” he said, nodding toward the stage where the nominees had all gathered for a group photo. “That was a really cool group of people up there.”

“Hurt Locker” screenwriter and producer Mark Boal wasn’t at the Spirit Awards brunch – his film had received two nominations last year, and so wasn’t eligible this time around, much to the dismay of many Spirit Awards officials.

Still, it was a crowded weekend for Boal. I caught up with him at the annual tea party thrown by the British Academy of Film and Television Arts/Los Angeles (BAFTA/LA), which took place in a ballroom of the Beverly Hills Hotel on Saturday afternoon.

The previous night, Boal had made an eloquent speech after his film won the Best Picture honor at the Broadcast Film Critics Awards. His agenda for the day after BAFTA, he said, included the awards ceremony of the Los Angeles Film Critics Association, which had already named “Hurt Locker” the year’s best film; Paramount’s Golden Globes party, which he planned to attend because he’s now writing a film for Paramount; and the Lionsgate soiree later in the evening, because he had a friend at that company.

“I was a little worried when the show started with that bit from ‘Inglourious Basterds,’” admitted Boal of the Critics Choice Awards’ opening film, in which host Kristin Chenoweth and director Quentin Tarantino recreated a scene from Tarantino’s film. Boal later lost to Tarantino in the screenplay category – but, he said, the evening ended on a high note with big victories for Kathryn Bigelow and the film. 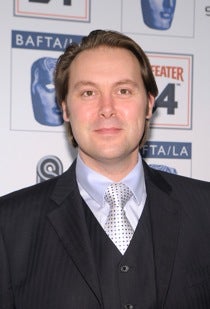 At the BAFTA tea, I introduced Christian McKay, who plays Orson Welles in Richard Linklater’s “Me and Orson Welles,” to my friend Jane Ayer, whose father was an actor who appeared in Welles’ “The Third Man.”

Jane told him a story of how, when she was 22, she and her friend John Mankiewicz (grandson of the “Citizen Kane” screenwriter) approached Welles at the Lucy’s El Adobe restaurant in Los Angeles. “Hello, Mr. Welles,” said Mankiewicz. “I’m John Mankiewicz, and my grandfather is Herman.” Welles fixed them with a stare, then said, unsmiling, “So?”

For the record, Jane explained, Welles was kidding. When a flustered Mankieciwz stammered, “and this is my friend, Jane Ayer,” Welles solemnly intoned, “Jane. Jane Eyre,” as he had done in the 1944 movie of that name, in which he co-starred with Joan Fontaine. Then everybody laughed, and it turned out that the old man wasn’t such a jerk after all.

Two business insiders from different sides of the industry stood around at one party comparing notes about taking out “for your consideration” ads in the trade papers, which are trying to hard to hang onto readers and ad dollars.

One trick, they agreed, is to not put the film company’s logo on the ad. If the ad is taken out by a company, Daily Variety charges their standard rate, which according to the BtoB media magazine and website is more than $25,000 for a four-color full page; if it’s an individual, they cut that rate in half.

“And you can negotiate,” said one. “If you tell them you’ve got no money, they’ll lower the price even more.”

Another tip, said the other: “Call them late in their schedule. If you buy an ad a month in advance, they’ll charge you the full rate. If you call a week ahead of time, they might really want to fill that space.”

At the Spirit Awards brunch, “An Education” director Lone Scherfig had a cup of coffee but couldn’t hang around for long. “I have to leave for Palm Springs in 15 minutes,” said Sherfig, who was doing a Q&A after a screening of her film at the Palm Springs International Film Festival. “But I’ll be back tomorrow for the Golden Globes.”

The night before, she said, she and Nick Hornby met Robert Downey Jr. at a party and asked him if he’d read Hornby’s new book, “Juliet, Naked,” which Sherfig hopes to direct.

“You can just go up to people and talk to them at Hollywood parties,” the Danish-born director said with a smile. “I’m not used to that.”

Lawrence Inglee, the producer of “The Messenger,” was also shaking his head over an encounter he’d had the night before, at a New York Times party at the Chateau Marmont. “You don’t expect Shirley MacLaine to come up to you and tell you she loved your movie,” he said. “Or Tom Cruise.” 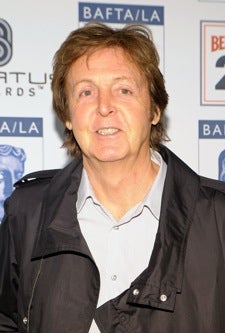 If certain celebrities exert a gravitational force on everyone around them – and it’s impossible to spend any time at Hollywood parties without learning that they do – then here’s a truth driven home this weekend: there is no celebrity gravitational force like that belonging to a Beatle.

On Friday night at the Critics Choice Awards, every commercial break brought with it a steady stream of people to Paul McCartney’s table at the side of the stage, where the famous and obscure alike had their pictures taken with the Cute Beatle. (Imagine my dismay when I learned, the next morning, that I’d initially been given a pair of seats at McCartney’s table, only to be moved in some last-minute reshuffling done by Disney.)

And the next afternoon at the BAFTA tea party, the atmosphere of the room was transformed when McCartney showed up. What had been a collegial, casual atmosphere, with the likes of Helen Mirren, Christoph Waltz, Joan Collins, Claire Danes, Ben Foster and Anna Kendrick scattered around the room, changed as everyone in the center of the room suddenly began to cluster around McCartney.

And when he, Quentin Tarantino and Jane Fonda got together for a chat, they nearly sucked the entire room into the vortex of their celebrity.

Julia Roberts made it official the next night at the Golden Globes when she said, "If you want attention, sit next to Paul McCartney. I’ve never gotten so many texts in my life."

Speaking of the gravitational pull of celebrity, George Clooney probably comes in a not-so-close second to McCartney. Saturday night at the Paramount party at the Chateau Marmont hotel, the crush around Clooney was nearly impassable – which would have been a more impressive display of the man’s celebrity if the entire Chateau hadn’t been nearly impassable.

The most crowded soiree of the day, Paramount attracted lots of celebs – in addition to Clooney, there was Leonardo DiCaprio and Kate Winslet, Robert De Niro, Mark Wahlberg, Martin Scorsese, Vera Farmiga, Anna Kendrick, Mike Tyson, Tobey Maguire, and many others – but was overcrowded to the point where 78-year-old cinematographer Gordon Willis, a recent honorary Oscar winner, was mercilessly jostled and jarred as he tried to make his way to Scorsese. 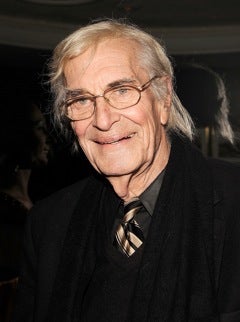 But Willis was certainly matched in stamina and then some by 81-year-old actor and Oscar winner Martin Landau. Certainly, it made sense to see Landau at the BAFTA tea party, where tables made things comfortable and the British side of old Hollywood was ably represented by the likes of Jacqueline Bisset and Joan Collins.

But there he was a few hours later at the Chateau Marmont for Paramount’s party, braving the crowds and the crush and the long wait at the valet stand. And then, as the night got even later, he was back at the Beverly Hills Hotel, this time in the Polo Lounge for the Lionsgate party.

“A Serious Man” star Michael Stuhlbarg amazingly didn’t make the shortlist of 15 in the BAFTA best-actor category, but he nonetheless showed up at the BAFTA/LA tea party after leaving the Spirit Awards brunch. Coming from the New York theater scene, he said, he’d never experienced anything like the Hollywood awards circuit before. “But I don’t mind it. The movie was so much fun to make that I’m happy to support it.”

Fun? Even though the Coen Brothers put his character through hell?

Also at the BAFTA party, “Up” director Pete Docter, who is almost six-and-a-half feet tall, stood and talked with actor Bob Balaban, who isn’t. Later, Docter said he was looking forward to getting back to Northern California after the Globes, where he hoped to get in a couple of weeks of work before the announcement of Oscar nominations.

“I guess my schedule after that will be determined by … the news,” he said with a grin.

Awards season can be exhausting, admitted “The Last Station” director Michael Hoffman, who came with his star Helen Mirren to the Spirit brunch and the BAFTA tea, and talked about the nonstop grind of screenings, film festivals and media appearances he’s been doing.

“I ran into [‘Precious’ director] Lee Daniels last weekend,” he said, “and he told me, ‘I’m finally sick of talking about my movie.’”

Late Sunday night, after the Globes had ended and the parties were getting started, a small group stood waiting for a shuttle bus to take them from a parking structure to the Beverly Hilton. A nearby bank of elevators chimed relentlessly, each bell signaling another group of partiers ready to head for the Hilton.

“Every time a bell rings,” said one of the group, “an angel gets his wings.”

“No,” corrected another. “Every time a bell rings, ‘Avatar’ wins another award.”