Unlike other slasher movies, like the later “Friday the 13th” installments or the “Halloween” franchise, “Scream” is as much a whodunnit as anything else. A killer has never carried over from one entry to the next; instead, in every “Scream” a new scenario is introduced, wherein Sidney Prescott (Neve Campbell) finds herself stalked by a killer that has some connection to her or the initial series of attacks dramatized in the first “Scream.” For this new movie, also simply titled “Scream,” the marketing materials and promotional packages have emphasized the guessing game – the tagline on the official poster states, “The killer is on this poster.”

Now, with the film finally out there (in theaters everywhere), the question of who the killer is in “Scream” should be discussed. The only question that remains is: do you like scary movies?

The hook for this new “Scream” is arguably the cleverest since at least “Scream 2” – this time around, a killer in the trademark mask (which is meant to suggest Edvard Munch’s “The Scream”) and black robes is targeting victims who are related to the original participants of the first “Scream.” Within the “Scream” universe, those events have been immortalized in a book by Gale Weathers (the character played by Courtney Cox, who returns here) called “The Woodsboro Murders,” which was then adapted into a long running horror film franchise called “Stab.” Amongst the characters who are either directly or indirectly involved: Randy Meeks’ nieces and nephews (Mason Gooding from “Booksmart” and the luminous Jasmin Savoy Brown from “Yellowjackets”), a girl whose parents purchased a house where some of the murders took place (Mikey Madison from “Once Upon a Time in Hollywood”) and the son (Dylan Minnette) of Sheriff Judy Hicks (Marley Shelton), a prominent character from “Scream 4” who you probably don’t remember. In this new “Scream” everything is forensically catalogued. As it should be. 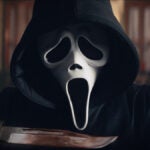 The new movie kicks off with Tara Carpenter (Jenna Ortega) getting attacked but not killed. This attack causes her big sister Sam (Melissa Barrera from “In the Heights”) to return to town. Of course, given the conceit of the movie, Sam has some unspoken emotional baggage she hasn’t shared with her sister (or anybody else in the murder-plagued town of Woodsboro): she is actually the daughter of Billy Loomis (Skeet Ulrich, who makes a surprise appearance as the devil on her shoulder and is clearly having a ball). This puts her in the crosshairs of the killer and directly in the sightline of the law enforcement investigating the killings.

Former sheriff Dewey Riley (David Arquette) gets pulled into the investigation by Sam, who warns her that she should look to those closest to her, like her affable boyfriend (Jack Quaid) and those in Tara’s immediate social circle. They start their investigation but tragically, during a very bloody confrontation at a local hospital (shades of both “Halloween II” and “Halloween Kills”), Dewey is killed. This is enough to get Gale and Sidney involved in the mystery (Gale was already on her way down after learning of the initial murders, Sidney was reluctantly tugged back to town by Dewey’s death). With the two biggest legacy characters of the franchise now in the thick of it, an increasingly high body count piling up, and more meta references than you could quickly write down while watching the movie for the first time at a critics’ screening earlier this week, this new “Scream” kicks into high gear. It practically screeches into the third act.

The Scene of the Crime

As Sam and Tara (and Sam’s dopey boyfriend) are fleeing the hospital following the massacre that left Dewey dead, they make a desperate bid to get out of town. One problem: Tara has forgotten her inhaler. Her friend, who lives nearby, has one. Can they stop by Amber’s (Madison) place real quick on the way out? But of course. The only problem is that Amber is having a party, which seems sort of inconsiderate given a) the extreme amount of death that has befallen Woodsboro and b) how much more sensitive kids are supposed to be these days. (The original film staged the party because, thanks to the principal’s demise, school was canceled. It made vaguely more sense and the celebratory mood was at least partially justified.)

Gale and Sidney are also following Sam and Tara (Sidney stuck a tracker on their car; she admits it’s a pretty Gale move) and show up at the same house. By the time they get there, most of the partygoers have left and our suspects and survivors are gathered in the same house – Sam, Tara, Sam’s boyfriend, and Tara’s circle of friends. A true Agatha Christie scenario, not as elegantly drawn as the original movie but close. The only ones missing are the legacy characters. But don’t worry, they arrive soon enough. 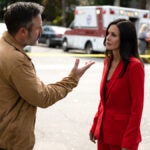 When Gale and Sidney get to the house, a wave of sickening understanding washes over them: it’s Stu Macher’s house, one of the killers from the original film and the site of that movie’s operatic mass murder. As they hear bloodcurdling screaming coming from inside the house, Cox deadpans, “Sounds about right.” Indeed.

Alright, time to get down to the question: who is the killer this time around?

Well, there is a lot of running around, a lot of stabbing, a lot of shooting. Finally, it’s revealed that Amber is in fact the killer! She makes her big reveal while killing Liv (an oddly under-utilized Sonia Ben Ammar) and stabbing Mindy (Savoy Brown). But Amber notes, there’s always two killers. (Brief caveat: there was only one killer in “Scream 3.” But that is just one of the reasons that god awful movie is an outlier in the franchise.)

That leaves the question: who is the other killer?

Why it’s none other than Sam’s nondescript boyfriend Richie (Quaid). Gasp! But he seemed so helpful and well-intention. Turns out, not so much.

But even better than the reveal is the reason why. As it turns out, Richie is a “Stab” superfan, who has grown disillusioned with the direction the franchise has taken. He wants to course correct, by providing a story that will bring everybody back to the series. And he wants to do this by committing a series of heinous small-town murders. His monologue is priceless, tapping into the phenomenon that has plagued big studio product these days: toxic fandom. Richie would be one of the guys crying about the Snyder Cut of “Justice League,” or whining about “Star Wars: The Last Jedi” endlessly on Twitter. His speech is so great and perfectly aligns with the preoccupations of the franchise. He’s got to kill off the next generation and the old guard too. 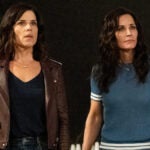 Apparently, Amber connected with Richie and got militarized. She agreed to help him and was the one responsible for Dewey’s death. (The only thing that doesn’t quite track is how tiny Amber is. It didn’t exactly look like Willow was running around in the Ghostface mask during other parts of the movie.) With Gale shot and Sidney stabbed, a tussle ensues. Amber tells Gale to “pass the torch,” so Gale throws her into the open flame of the stove. Meanwhile, Sam is dealing with Richie. He stabs her repeatedly and they also get into a skirmish. Sam looks in the mirror and sees her dad Billy staring back at her; he points her towards a knife. In one of the coolest moments in the entire franchise, she repeatedly knifes him, eventually slitting his throat.

Gale and Sidney hobble forth and say to be careful, they always come back. Sam shoots Richie in the head. Then Amber runs out of the kitchen, half her face burned off, and is shot by Tara. Well that’s the end of that chapter.

As they all leave the scene of the crime, it’s revealed that twins Mindy and Chad (Gooding) have survived. Gale says that she’ll probably start working on a new book, not about the bloodbath they just witnessed (nothing good can come of that). Instead, she’ll write a new book about the sheriff who tried to do something right in his beloved small town. That’ll be much better.

Honestly, the idea of Sam grappling with the darkness of her past could open up new avenues for the franchise, even though much of the cast has been killed off and it would be difficult to convince the legacy characters return. Still, as another character says earlier in the movie, “is it even a ‘Halloween’ movie without Jamie Lee?”