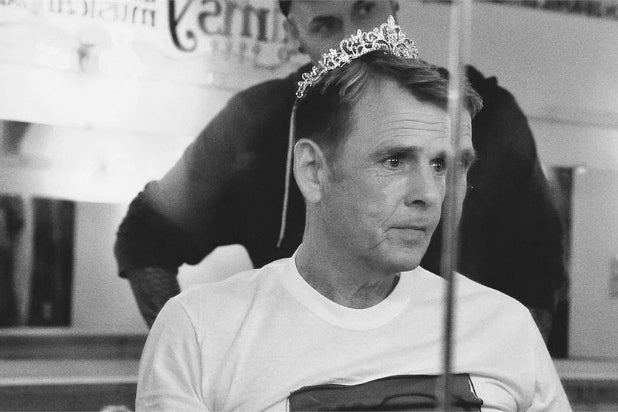 Mark Patton was in his mid-twenties when he was cast as Jesse Walsh in “A Nightmare on Elm Street 2: Freddy’s Revenge,” which was as financially successful as the first movie in that series. But the blond and beautiful and sensitive Patton, who was a closeted gay actor, took a career hit for being seen as a male scream queen. The new documentary “Scream, Queen! My Nightmare on Elm Street” details how Patton disappeared and then re-emerged to take control of his image.

Directors Roman Chimienti and Tyler Jensen have packed the film with as much social context as possible, and they view as many sides of this story as they can in a fast-paced, engaging style. There are interviews with academics and drag queens and fans of the horror genre, and this gives the movie a wide-ranging perspective that helps us better understand the moving personal story at its core.

Patton himself is a very articulate and likable interview subject who is able to distill his experiences with just a few words. He remembers having fantasies about being with a prince or a king when he was four years old: “I wasn’t a girl, I knew I was a boy…I was free because I was gay.” As a teenager, Patton knew he had to move from his hometown in Missouri to a big city, and his drama teacher encouraged him to do this. “All of my problems were just a problem of geography,” he says.

Patton went to Manhattan in 1977 with a one-way plane ticket and $132 in his pocket. He stayed at a cheap hotel and almost immediately started getting work in commercials because he had the sort of winsome, wholesome looks that were perfect for that period. Patton was cast in “Come Back to the 5 & Dime Jimmy Dean, Jimmy Dean” on Broadway in 1982 for director Robert Altman, and all of his dreams started to come true. Patton is seen here standing outside the building where they rehearsed this play. “David Bowie kissed me on the staircase downstairs,” he remembers.

His co-star Cher took Patton under her wing and was “exactly what you wanted her to be,” he says. After shooting the film of “Jimmy Dean” for Altman, Patton moved out to Hollywood and got himself a beautiful boyfriend, Timothy Patrick Murphy, who was acting on the TV show “Dallas.” Patton was on his way up, and he knew where to be and how to work his connections; he was having dinner at Merv Griffin’s house and acting with a young George Clooney on television.

But then he got the lead in the second “Nightmare on Elm Street” film, and this was a mixed blessing. The director of that movie, Jack Sholder, says that he was totally unaware of any gay subtext in the script. This feels believable after we see Sholder interacting with Patton and other cast members at a reunion hosted by a horror movie convention because he doesn’t seem like the most sensitive or aware guy even today. He advises Patton to move on and forget what happened to him in the mid-1980s.

David Chaskin, the screenwriter of “A Nightmare on Elm Street 2: Freddy’s Revenge,” was aware of what he was doing, and he admits now that the gay angle was just an exploitation element he had written into the script. Some of the actresses from the movie say they were unaware of this element in the script at the time, but Robert Englund, who played the villainous Freddy Krueger, says he was fully aware of it and even decided to bring it out more in the scene where Freddy caresses Patton’s Jesse.

Patton gets to meet with Chaskin on screen here, and Chaskin does his best to apologize for interviews in which he had said that Patton’s presence made the movie gayer than he had intended. Patton accepts this very gracefully, and he has turned what was initially something negatively intended into a kind of victory for himself at the horror conventions, where he is seen dealing very sweetly with fans.

Patton had it all, and then he lost it all: His boyfriend Murphy contracted HIV and died of HIV complications in 1988 after being hounded by the National Enquirer. Patton also contracted the virus, and his health was touch-and-go for a while before he built another life for himself in Puerto Vallarta and opened up a store.

When Patton started participating in events related to “A Nightmare on Elm Street” in 2010, he was dismayed by the homophobic comments online about his character in the second movie, and so he has worked to change that and to reclaim what he represented.

There is something very touching about the way we see Patton take something that was once shameful and turn it into something fabulous that he can be proud of. This is a movie that does not stint on the sad and complicated aspects of what Patton went through, which is why we can feel the full force and cheerfulness of his re-birth and resurrection.