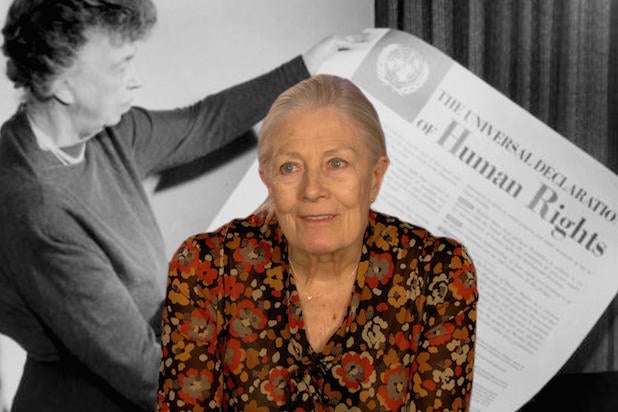 Vanessa Redgrave has a long and storied career as an actress, but she waited until she was 80 years old to direct her first movie, “Sea Sorrow.” She also appears in the film, but only as herself: a woman concerned about the humanitarian and human tragedy taking place as refugees flee wars in Syria, Afghanistan, and other trouble spots.

“Sea Sorrow,” which premiered at the Cannes Film Festival on Thursday after a press screening on Wednesday, is the latest documentary to chronicle the worldwide refugee crisis, which has become a hot-button political issue in Europe and America.

The question is, does Redgrave have anything new to bring to this story? For the last year or two, serious documentarians have been drawn irresistibly to the topic, particularly to Syria and its refugees. Oscar nominations earlier this year included the haunting documentary feature “Fire at Sea,” as well as three films about Syria and its refugees in the Best Documentary Short category: “4.1 Miles,” “Watani: My Homeland” and the winner, “The White Helmets.”

And this year’s Sundance Film Festival featured another trio: “City of Ghosts” by Matthew Heineman, “Cries From Syria” by Evgeny Afineevsky and “Last Men in Aleppo” by Feras Fayyad. Heineman and Afineevsky are recent Oscar nominees for their features “Cartel Land” and “Winter on Fire: Ukraine’s Fight for Freedom,” and Afineevsky’s movie opens with footage of the body of three-year-old refugee Alan Kurdi lying in the surf on a Turkish beach, the same image that Redgrave has said prompted her to make “Sea Sorrow.”

Granted, drawing any additional attention to this horrifying humanitarian and human disaster is a worthy goal, and Redgrave’s name alone should help attract a few new viewers who could be moved by the question that her film essentially asks: Where is our humanity?

In the end, that may be the greatest achievement of “Sea Sorrow,” which is clearly a passion project but just as clearly not the work of an accomplished nonfiction director.

Heineman and Afineevsky, to name two, brought far more to the subject in the way of artful filmmaking; Redgrave’s film goes from talking head to news footage to coverage of Redgrave on a humanitarian mission to another talking head.

But the film will break your heart because it focuses on refugee children, and with the help of Cannes it may infuriate some who don’t understand why governments seem increasingly unwilling to open their borders to displaced children in desperate need of home.

The film ties everything to the horrors of World War II, and the subsequent Universal Declaration of Human Rights, which Eleanor Roosevelt presented at the United Nations in 1948. Again and again, “Sea Sorrow” presents us with governments who seem to be facing their own “have you no decency?” moments, to the point where Redgrave comments that she finds herself back among the “really appalling historical figures” of “Richard III.”

Also Read: Lionsgate Will Be 'Dragged Across Concrete' for US Rights to Mel Gibson, Vince Vaughn Thriller

Redgrave’s comment about “Richard III” is a clue to the one thing she brings to the story that might be hers alone: a sense of poetry via William Shakespeare.  The film also stops for two Shakespeare readings, most notably an extended sequence from Act II of “The Tempest,” in which she found her title and with which she ends the film.

In it, Ralph Fiennes and Daisy Bevan play Prospero and his daughter Miranda, exiled on an island after a dangerous voyage on “a rotten carcass of a boat.” The sequence ends on Prospero’s line, “Sit still, and hear the last of our sea-sorrow” — but if you were to go back to the original text and pick a moment that takes place just before the lines the filmmaker uses, you can find a lament from Miranda that could well serve as Redgrave’s reason for making “Sea Sorrow”:

“O, I have suffered
With those that I saw suffer: a brave vessel,
Who had, no doubt, some noble creature in her,
Dash’d all to pieces. O, the cry did knock
Against my very heart.”

Can poetry cast tragedy in a new light? With “Sea Sorrow,” Vanessa Redgrave is hoping it can.