While serving as guest host for “Jimmy Kimmel Live” for the third time this week, Sean Hayes took the opportunity to highlight acting prowess by unveiling his “deleted” (emphasis on the air quotes) scenes from Netflix’s “Ozark.”

“Most people don’t know this, but I was in the original cast of ‘Ozark’ with my buddy Jason Bateman,” he told the crowd. “We shot a few episodes, but ultimately they thought I wasn’t the right fit for the show. And Bateman, to his credit, was gracious enough to give me the footage from the scenes I’ve shot.”

What followed was the parody you didn’t know you needed in your life this morning. 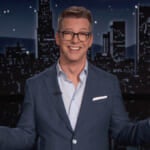 Dolled up as Laura Linney’s character Wendy Byrde, the shrewd yet lethally calculating political power player and cartel asset in “Ozark,” Hayes looks like he’s having a ball as he yells at his “husband” —Bateman’s Marty Byrde — during a couple’s therapy session. “Do you not see a pattern here, ‘Teen Wolf?'” he shouts, referencing Bateman’s 1987 sequel “Teen Wolf Too.”

Realism isn’t exactly what Hayes’ Wendy is going for as he repeatedly breaks the fourth wall, winks directly at the camera, and holds up the Emmy Award Linney so deserved on two nominations. (Shame on you, TV Academy!) And hey, if you can smoke a cigarette while sipping a martini and calling your scene partner a “sneaky little b—-,” why not go for it, right?

“You two are f—ing crazy,” Guillermo, Kimmel’s usual sidekick, tells the pair as the couple’s therapist. If only someone would have been that blunt in the real show. 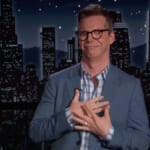