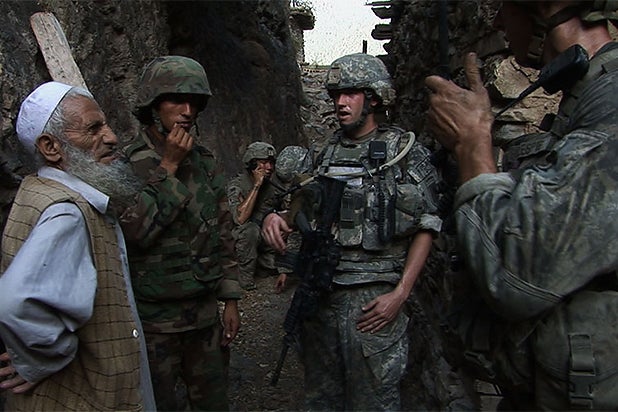 Award-winning war journalist and filmmaker Sebastian Junger is no stranger to risk-taking.

After venturing to Afghanistan and Nigeria for film projects, he is now taking a daring and unconventional approach to marketing and distribution with his latest documentary, “Korengal.”

While the film is available to stream via more traditional services including iTunes and Amazon, Junger and his partners at indie company Goldcrest Films are also releasing a series of extras to potential viewers via BitTorrent’s Bundle streaming service.

“We don’t have a distribution partner, we are distributing and investing the film ourselves,” Junger told TheWrap, citing BitTorrent as an innovative way to get a younger demographic to talk about the documentary about soldiers in the war-ravaged Korengal Valley of Afghanistan.

The Korengal Bundle will feature three photo clips and photo stills from “Korengal,” a TED Talk and exclusive letters and notes from Junger, and a 12-min short chronicling the story of Sal Giunta, the first living Medal of Honor recipient since the Vietnam War who was initially featured in 2010’s “Restrepo.” Also included with the Bundle is an exclusive interview with Junger that will be featured in the blog editorial.

It’s not the first time the platform — traditionally linked to illegal piracy of films, TV and music — is letting artists and other creatives offer fans a window into the process using open technology. In 2013, BitTorrent offered a similar bundle of extras for Oscar-winning documentary “The Act of Killing.”

Junger — who is also the author of the best-selling book “The Perfect Storm,” which was adapted into the 2000 film starring George Clooney — is a big fan of deviating away from traditional models of funding and distribution. “The self-funding, self-distributing model is fantastic,” he said. “You go straight from the filmmaker to the viewer without getting filtered through broadcasters or distributors.”

The director also expressed satisfaction that he held firm while negotiating the sale of “Restrepo” to National Geographic alongside late photojournalist Tim Hetherington. “We paid for it ourselves and sold a completely finished film to Nat Geo,” he recalled. “We refused to give them editorial control and that almost torpedoed the deal. We were ready to walk away even though we were nearly bankrupt, but it was really important to us.”

“Korengal” is now available to stream via platforms including iTunes and Amazon.